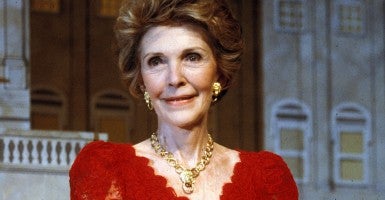 His death was confirmed by his wife Annette de la Renta, and attributed to complications of an eight-year battle with cancer.

De la Renta will go down as one of the most famous designers for  first ladies in American history. He will be remembered for designs from Hillary Clinton’s trademark pantsuits to Laura Bush’s glamorous inaugural gown.

For most of her tenure as first lady, Michelle Obama notably never donned any of de la Renta’s designs. Yet, earlier this month on Oct. 8—less than two weeks before his passing—Obama arrived to a cocktail party in a stunning de la Renta creation.

The moment, whether accidental or on purpose, was a fitting tribute to a historic career.

In honor of the late designer, here is a look back at some of his most famous first lady designs. President Bill Clinton dances with first lady Hillary Clinton at the Midwest Inaugural Ball at the National Air and Space Museum in Washington, D.C. The ball was part of the festivities surrounding Clinton’s second term as president of the United States. (Jan. 20, 1997.) Hillary Rodham Clinton is sworn in as the new Democratic senator from New York, as her husband President Bill Clinton and their daughter Chelsea hold a Bible, during a re-enactment ceremony in the Capitol’s Old Senate Chamber. (Jan. 3, 2001.) President George W. Bush and Laura Bush face the cameras with the 2006  Kennedy Center honorees in the Blue Room of the White House during a reception. (Dec. 3, 2006.)

Michelle Obama speaks at a Fashion Education Workshop at the White House. (Oct. 8, 2014.)