North Korean Despot has Reappeared. But That’s not the Most Important Issue Here. 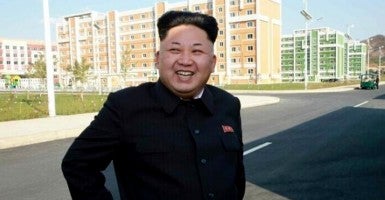 North Korean leader Kim Jong-un has waddled back onto the world stage ending, or at least reducing, widespread speculation of coups or assassinations in Pyongyang.

On Oct. 14, North Korean official media released photos of Kim, albeit photos of him using a cane for the first time. Questions remain, such as what medical condition required him to be absent for such an extended period and why did he conduct a routine inspection of a housing unit but miss an important national celebration four days earlier?

This would be a mistake.

Though currently engaging in one of its characteristically cyclical charm offensives, North Korea continues its relentless pursuit of nuclear weapons and the missile means to deliver them. Since Kim Jong-un assumed power, North Korea has initiated, expanded and accelerated construction efforts for fissile material production (both plutonium and uranium), nuclear test preparations and missile launch facilities.

North Korea has restarted its nuclear reactor to expand its supply of weapons-grade plutonium. When operational, the reactor could produce approximately six kilograms of plutonium (enough for one nuclear weapon) per year. Pyongyang also doubled the size of a uranium enrichment plant, enabling production of enough weapons-grade uranium for up to two nuclear weapons per year. In early 2014, the regime completed two tunnels for additional nuclear tests.

By October 2014, North Korea had completed a major upgrade program to a missile launch site, enabling launching rockets of up to 50 meters in length, almost 70 percent longer than the Unha-3 space launch vehicle that was tested twice in 2012. South Korea recovered components of the North Korean long-range missile launched in December 2012 and then assessed the missile to have “a range of more than 10,000 kilometers.”

New York and Washington, D.C., are approximately 11,000 km from North Korea. North Korea has conducted static rocket engine tests for a road-mobile ICBM in development. Once operational, the missile could reach U.S. bases in the Pacific and Alaska.

Diplomatic attempts to curb North Korea’s 50-year quest for nuclear weapons have failed and Pyongyang has repeatedly declared it will never negotiate away its nuclear arsenal, even revising the North Korean constitution to enshrine itself as a nuclear nation. North Korean Foreign Minister Lee Su Yong reiterated the regime’s refusal to abandon its nuclear weapons, declaring last month that North Korea’s weapons were “not a bargaining chip to be exchanged for something else.”

North Korea initiated a flurry of diplomatic outreach efforts to overcome the country’s international isolation and undermine support for international sanctions imposed after Pyongyang’s repeated violations of U.N. resolutions and international law. A senior North Korean delegation led by Hwang Pyong So, vice chairman of the powerful National Defense Commission and unofficially the second-most powerful man in North Korea, made a surprise visit to Seoul on Oct. 4 to jumpstart stalled inter-Korean discussions.

Pyongyang probably sees Seoul as the most pliable link in the international coalition against it. President Park Geun-hye faces growing public criticism for her trustpolitik (trust-building) policy’s failure to spur any progress toward better inter-Korean relations and is under tremendous domestic pressure to soften its demands for North Korea actions prior to serious engagement.

It is important to keep track of Kim Jong-un’s hold on political power and his diplomatic outreach efforts. But it is equally important to not lose focus on the growing North Korean nuclear threat to the United States and its allies.