Houston Tries to Force Pastors to Provide Sermons to Government 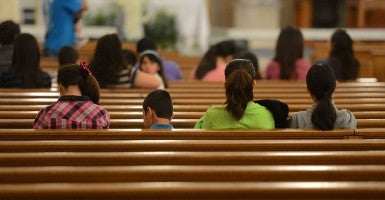 Everything is bigger in Texas, and that includes government intimidation.

When the Houston City Council passed an ordinance that some claim would allow men into women’s restrooms, and vice-versa, voters got mad. Many pastors got mad too–and they helped organize a petition drive to remove the law from the books. They reportedly got more than 50,000 signatures, when all they needed was 17,269.

But the city claimed that only 15,000 were valid, and refused to place the issue on the ballot. So, in August, some of the petition’s supporters filed a lawsuit to force the mayor to allow citizens to vote on whether to repeal the law.

Here’s where it gets interesting: In response, the city of Houston has now issued incredibly broad subpoenas as part of the discovery process to several pastors who are not directly involved in the lawsuit demanding that they provide certain information. “Discovery” is a legal procedure which allows people who sue or are sued to obtain information that is relevant to that lawsuit. But rather than simply asking for information about the validity of petition signatures, which would be germane to the lawsuit, Houston has demanded that the pastors turn over all records in their possession relating to “the topics of equal rights, civil rights, homosexuality, or gender identity,” some communications with lawyers, budgetary information and “[a]ll speeches, presentations, or sermons related to [the bathroom ordinance], the Petition, Mayor Annise Parker, homosexuality, or gender identity….”

At best, the lawyer who drafted the motion is overly zealous, even though it should have been obvious that the subpoenas were not seeking information that would be relevant to the lawsuit. More likely, though, the city of Houston wants to intimidate those pastors (and others) who might support plaintiffs’ viewpoint into not speaking out.

How might it intimidate pastors? First, no one likes the government poking around in their business, and it is costly to respond to subpoenas. Second, many folks are being targeted for speech supporting the traditional understanding of marriage—much of their speech has been wrongly characterized as “anti-gay” speech. Don’t believe it? Just ask Brendan Eich, former CEO of Mozilla. Third, there is a renewed effort to claim that religious organizations should not be “political,” a pernicious claim that is enshrined in anti-religious laws such as the Johnson Amendment.

In response, the Alliance Defending Freedom has filed a memorandum in support of the non-party pastors, explaining why the court should quash the city of Houston’s onerous and outrageous subpoenas. But this should not have been necessary–pastors and other individuals have the First Amendment right to speak freely and to freely exercise their religion without fear of government retaliation, intimidation or harassment. Let’s hope the court sees this for what it is–an attempt by certain Houston officials to chill speech and silence its critics.