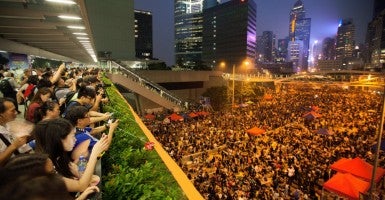 The stare-down between Hong Kong’s government and pro-democracy demonstrators intensified for a second day after the government pulled out of planned talks.

Hong Kong’s government and student leaders of the protests, which began Sept. 28, had agreed to begin talks Friday on the future of democracy in the city.

The government canceled the talks after student groups and their political allies held a press conference where they promised to continue demonstrations to keep pressure on officials.

The state-run People’s Daily newspaper in China said the United States was behind the pro-democracy protests,  a claim rejected by the U.S. State Department, as thousands of the Hong Kong people returned for sit-ins today in the main protest zone, the Associated Press reported.

They responded to organizers’ calls to boost a civil disobedience campaign that had paralyzed key roads and streets in the city center for two weeks, AP reported.

What is happening there is about the people of Hong Kong, and any assertion otherwise is an attempt to distract from the issue at hand, which is the people expressing their desire for universal suffrage in an election that provides a meaningful choice of candidates representative of their own voters’ will.

Demonstrators have demanded the resignation of Leung Chun-ying, the current chief executive, or top city leader, and insisted on the democratic election of his successors as well as all lawmakers. This would allow voters, not a committee aligned with Communist leadership in China, to pick candidates.

Throughout the past week, a few hundred protesters remained on the streets around the financial and government district of Admiralty and in Mong Kok.

But with the Hong Kong government calling off talks, those numbers swelled again into the thousands Friday, BBC News reported.

Walter Lohman, director of the Asian Studies Center at The Heritage Foundation, said he hopes cancellation of talks does not preclude a peaceful resolution.

“Like most friends of Hong Kong, I hope Beijing can be persuaded to compromise, if not on civic nominations, then at least on opening up the process much more than they have so far suggested,” Lohman said. “Without some movement on its part, and on the part of the government in Hong Kong, I can’t see any way out.”