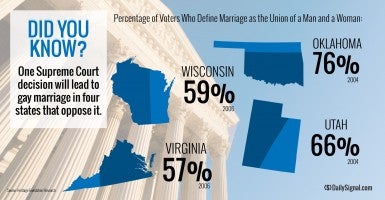 The Supreme Court’s decision today to not hear any of the cases on same-sex marriage means, as my colleague Ryan T. Anderson writes, that “lower court rulings that struck down state marriage laws now will go into effect, forcing the redefinition of marriage in [Indiana, Wisconsin, Virginia, Oklahoma and Utah] and potentially in other states in the 4th, 7th, and 10th circuits.”

That shouldn’t be acceptable—regardless of your position on same-sex marriage.

Voters in 31 states voted to define marriage as being between a man and a woman.

And now the will of the people is being struck down by judge after judge.

If you think same-sex marriage should be legal, put it on the ballot. Ask the people of your state to decide in a vote.

Pundits have been pointing out that polls show Americans’ views on same-sex marriage have changed in recent years. “The Supreme Court confirms what we already knew: The fight over gay marriage is over,” tweeted the Washington Post’s Chris Cillizza, including a chart that shows higher support for than opposition to same-sex marriage.

But those polls are irrelevant. If people want to change a law they now consider to be wrong, they should do it at the ballot box, not at the courthouse. Unless, of course, the law is in clear violation of the text of the Constitution. But no one seriously thinks that when we ratified the 14th Amendment, we were voting to redefine marriage.

Americans deserve the right to choose the laws governing marriage. Everyone who values the will of the people, no matter what they think on the issue of same-sex marriage, should be decrying how it’s judges, not Americans, getting to decide this important issue.