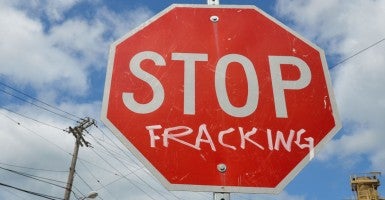 President Barack Obama raised a lot of eyebrows when he declared in his United Nations climate change speech: “Over the past eight years, the United States has reduced our total carbon pollution by more than any other nation on Earth.”

That’s absolutely true. And it’s remarkable because we as a nation didn’t ratify the Kyoto Treaty, pass a carbon tax or enact Obama’s cap and trade agenda.

It’s all the more remarkable because Americans have been scolded nearly every day for being a major source of all these satanic gases that are allegedly burning up the planet. Instead, since 2005, our emissions are down by roughly 10 percent and almost twice that amount on a per capita basis. Not bad.

How did that happen? If you think the answer is that we’ve transitioned to green energy, you are completely wrong.

The game-changer for the U.S. has been the shale oil and gas revolution over the past six years brought about through new smart drilling technologies. The U.S. is now the largest natural gas producer in the world. And as America has produced more natural gas, we have shifted away from coal.

This, according to the Energy Information Administration, accounts for more than 60 percent of the carbon emission reductions in the United States. Obama never mentioned that.

Here’s the real stunner: if we want to reduce carbon emissions further, investing in natural gas is a far more efficient strategy than going all in for so-called “green renewable energy” sources.

Over the last seven years, the U.S. government has spent almost $70 billion in tax, regulatory and spending subsidies to the renewable energy sector. But wind and solar energy after this avalanche of government support account for only about three percent of electricity production.

By contrast, the shale gas explosion has been almost entirely devoid of subsidies–yet its output has exploded.

That’s great news for the environment because natural gas emits only about half the carbon as coal, even though coal is much cleaner than it once was.

So one would think the climate change marchers who descended on Washington last week and all their green allies would be beating the drum for shale gas and hydraulic fracturing as an environmental godsend. No.

The one common theme of the green marchers these days is they hate fracking, even though it has done more to reduce greenhouse gases than all the government subsidies to wind and solar power combined.

The Sierra Club and other environmental groups which once saw natural gas as a valuable “bridge” fuel to the future, now denounce this wonder fuel. A new study making the rounds on the Internet says natural gas “won’t do much to reduce U.S. greenhouse gas emissions and might even raise them slightly.”

This is bad economic and environmental advice. Shale gas is a wonder fuel because it is clean-burning, abundant, domestically produced, and cheap. The price of natural gas has fallen by more than half over the last six years and we have at least 150 years of supply in the Marcellus Shale and elsewhere.

Americans better wake up to that reality, before the greens actually succeed.