Will Hong Kong Be the Scene of Next Tiananmen Square? 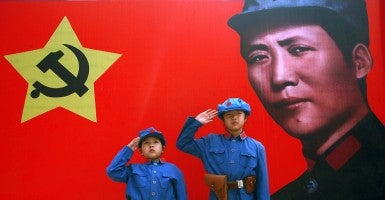 Chinese kids dressed in communist uniforms pose for a photo at a site used by former helmsman Mao Zedong and other leaders to discuss policy and future strategies in the Yangjialing Revolution, in Yan'an, Shaanxi Province, on April 6, 2014. (Photo: UPI/Stephen Shaver/Newscom)

I first visited Hong Kong in 1969 when I interviewed young Chinese “freedom swimmers” who had traversed the treacherous Hong Kong Bay—infested by sharks and patrolled by Chinese Communist gun boats—to reach the British crown colony of Hong Kong.

“Why did you risk your life to come to Hong Kong?” I asked the young swimmers who had known nothing but the heavy yoke of Chinese communism from birth. I expected that some would mention the Cultural Revolution then convulsing the country or a high-paying job or their own apartment or other “capitalist” benefits. Every one said the same thing: “I wanted to be free.”

So it was with China’s freedom swimmers in 1969. So it is with Hong Kong’s pro-democracy demonstrators today. Both reflect the innate desire for freedom that burns within all of us. This is the issue in Hong Kong: whether Hong Kong will have free and open elections in two years and continue to enjoy a special status as set forth in the one country-two systems agreement made by Beijing two decades ago. Or will the Chinese Communist government manipulate and control the elections and reject the governing agreement it signed?

Much is at stake in Hong Kong: Communist China’s image in the international community, Hong Kong’s political future, the hopes of a rising generation of Chinese that one day they might enjoy the same freedoms as their brothers in Hong Kong. In addition, Beijing hopes to establish Hong Kong as the financial center of Asia, a magnet for foreign commerce and investment attracted by Hong Kong’s entrepreneurial climate and a British-taught respect for the rule of law.

Which image will it be? Another blood-stained Tiananmen Square? Or the happy, triumphant faces of Hong Kong’s pro-democracy demonstrators? The answer rests with the Chinese Communist regime, already wrestling with disappointing economic growth and an ever-more-restive populace.

As for America, our role is clear—to stand by Joshua Wong and the other leaders of Hong Kong’s pro-democracy movement in their quest for what we have had for 227 years—a democracy in which freedom, opportunity, prosperity and civil society flourish.