Has Obama Enforced Immigration Laws? It’s All in How You Count the Numbers 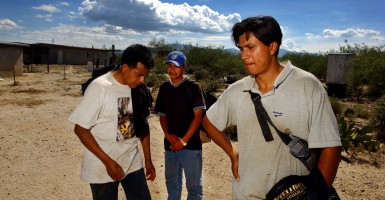 A report published Wednesday showed the Department of Homeland Security removed a record number of illegal immigrants from the country in 2013—many of them recent border crossers and convicted criminals.

But the number of immigrants sent home through a method where they voluntarily depart, which does not carry the same penalties as a formal removal, decreased 23 percent from 2012.

The figures revealed 178,371 immigrants were sent back this way—the lowest such number since 1967.

Immigration officials do not count voluntary returns and departures as deportations, according to Shawn Moran, a spokesman for the union that represents Border Patrol agents.

So by the government’s method, with only formal removals counting as deportations, Obama has sharply increased deportations during his time in office.

But others, such as Jessica Vaughan of the Center for Immigration Studies, argue the “most fair way to evaluate the numbers is to count both removals and returns together [as deportations].”

“My view is this administration has been pretty tough on enforcement,” said Marc Rosenblum, deputy director of the U.S. Immigration Policy Program at the Migration Policy Institute. “Removals are a tougher form of deportation than returns are.”

“This administration has been pretty tough on enforcement,” says Marc Rosenblum of the Migration Policy Institute.

If formally removed, immigrants are ineligible for a visa to return, and if they do return, they face criminal charges, Rosenblum said.

The figures reveal a shift away from removals of immigrants living in the interior of the country toward a focus on those caught crossing the border illegally, particularly along the border with Mexico.

About 44 percent of the deportations in 2013 were expedited, or “fast-track” removals of immigrants shortly after they were apprehended at the border.

Immigrants removed this way are sent back to their countries without going through immigration court.

Meanwhile, the numbers of removals from the interior of the country—about 133,000—have decreased.

“There is a trend of moving enforcement from the interior to the border,” Rosenblum said. “Obama has accelerated the trend of focusing on higher-consequence forms of enforcement with more serious implications for an immigrant being deported.” President Obama speaks on immigration reform in the Rose Garden of the White House. (Photo: Newscom)

David Inserra, a homeland security expert at The Heritage Foundation, said the emphasis on the border over the interior sets a precedent—that if you make it past the border, you stay—for those considering entering the country illegally.

“Deportations resulting from interior enforcement have plummeted, meaning that for all intents and purposes, once an illegal immigrant gets past the border or overstays their visa, they are home free because the Obama administration doesn’t enforce the law,” Inserra said.

>>> Did You Know? An Illegal Immigrant Lives in U.S. for 12.7 Years … and Other Interesting Factoids

The report also showed that DHS removed 198,394 illegal immigrants who had been convicted of crimes, about 45 percent of total deportations.

Obama’s administration has said its priorities for enforcement are convicted criminals and recent border crossers.

The 2013 figures probably will factor into Obama’s decision on how he fulfills his promise to act unilaterally to suspend deportation for millions of immigrants already in the country illegally.

“I do think this will generally fuel demands on the left who say, ‘Ah this is a record number of removals’,” Rosenblum said. “No one on the left will read this that [Obama] is actually a good guy. So there will be pressure on him [from the left] to act big on executive action.”

But, Rosenblum added, liberals should look positively on Obama’s enforcement record because he is removing fewer immigrants from the interior of the country—people likely long-settled in the United States—meaning he is breaking up fewer families.

“People in the opposition know there are more resettled families in the interior of the country, so they see this as once you settle into the country, you are home free,” Rosenblum said. “You are not quite home free, because if you commit a crime, you will get deported.”