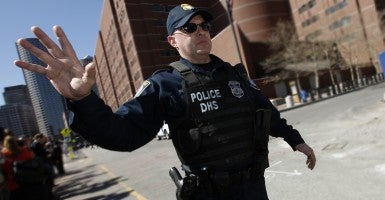 An investigative reporter whose private files were illegally seized during a raid on her home will receive $50,000 as part of a settlement with the Department of Homeland Security.

How one reporter turned a government raid on her home into a win for press freedom.

Audrey Hudson, an award-winning journalist most recently at the Washington Times, told The Daily Signal she was awoken by her barking dog around 4:30 a.m. on Aug. 6, 2013, to discover armed government agents had descended on her property under the cover of darkness. The agents had a search warrant for her husband’s firearms. As they scoured the home, Hudson was read her Miranda rights.

At the time, Hudson was investigating and reporting on Homeland Security, specifically its Federal Air Marshal Service and the Transportation Security Administration. Audrey Hudson is an award-winning journalist most recently at the Washington Times. (Photo courtesy of Audrey Hudson)

It wasn’t until weeks later that Hudson discovered the documents were missing—and even then only because a federal law-enforcement official told her she could pick up the files. Hudson notified the Washington Times, which took the government to court for violating the Privacy Protection Act.

This led to the settlement, which was first revealed by the Washington Times this week.

“The important thing about this settlement is that we did not let the government’s invasion of my privacy stand,” Hudson said. “We defended the rights of journalists to protect their sources from discovery by government security agencies, and that’s a victory for all journalists.”

The settlement required Homeland Security to pay $50,000 to Hudson, return the seized documents, promise that no copies had been made and any notes about them would be destroyed. In addition, it provides $25,000 to the Washington Times for attorney’s fees and requires the Coast Guard Investigative Service to initiate a review of and provide training on the federal Privacy Protection Act.

“The government has bent over backwards to assure us that the seizure of Ms. Hudson’s notes was just an error of judgment, not part of any organized effort to identify her sources,” Grannis said. “We hope that by bringing this claim we have helped to raise awareness within the government that reporters’ notes are legally protected from seizure in all but the most exceptional cases.”