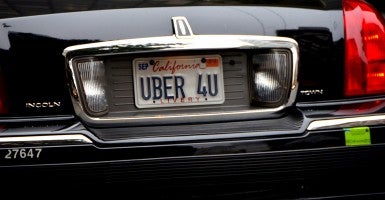 It is starting to seem as if the tide of Uber’s regulatory war may be turning. In Seattle, popular demand forced a city council that was once intent on capping rideshare drivers to throw open the gates to taxi competitors. In Virginia, temporary operating permits have replaced cease-and-desist notices, enabling rideshares to serve the Commonwealth. Robust competition seems to be winning some hard-fought battles.

Back around Labor Day, Salon published an article that denounced rideshare’s flagship company, Uber, and called for its demise. The thrust of the piece is that Uber competes with established taxi companies, and plays to win. It naturally will drive out all competition, whether traditional taxis or fellow rideshares, and eventually will establish a monopoly. As surely as Andrew Carnegie controlled steel and John D. Rockefeller monopolized oil, Uber will seize the market, heartlessly price gouge its customers with impunity and force its workers to make due with only the miserably low salaries that competition affords (because, of course, only unions can guarantee fair wages). Naturally, the government will have to step in and break up Uber.

The only sure way to keep markets open to the next Uber-like innovator is to get the government out of the business of picking winners and criminalizing competition.

Setting aside for the moment the simple fact that Uber’s domination of the market is anything but certain, the author neglects a critical point: The taxi industry already is a noncompetitive cartel. So why isn’t the government out flexing its trust-busting muscles? Because local and state governments made possible the taxi cartels in the first place.

In most cities in the U.S., the taxi industry is heavily regulated. Drivers must be specially trained, vehicles registered and paperwork filed and maintained. Licenses must be obtained and fees paid for individual drivers. Rather than fight these burdensome and costly compliance measures, the taxi industry fights to defend these requirements in its anti-rideshare struggle. Why? Because taxi licensing and regulatory schemes actually benefit taxi companies more than the public. And from the companies’ perspective, those benefits far outweigh any costs they impose on that service because those costs generally are passed on to the taxi-riding public anyway.

As one of us pointed out in a recent paper, licensing schemes such as those in the taxi industry can serve to keep competitors at bay. And it’s not just the taxi industry. States have licensing requirements for all manner of occupations, from barbers to florists to interior decorators. Sometimes those regimes actually make entering a field without a license a crime, which can lead to outlandish SWAT-style raids during which people get arrested for “barbering without a license.”

Entrepreneurial success in America should not be dependent on political connection and favoritism.

Ever wonder why taxis are run-down and unclean and drivers can be terrifyingly bad? Lack of competition is at least part of the answer. The very regulations in place to “protect” consumers have become a comfort blanket for a complacent industry. And if you doubt that the taxi industry is using regulation to their advantage, consider the number one argument the taxi lobby makes in each city where Uber comes knocking: relaxing existing regulations to allow rideshares to compete will cost taxi companies lost fares and could cause them to go under.

Of course, today’s upstart innovators are tomorrow’s entrenched interests. So long as this form of economic protectionism exists, there is nothing to stop a more established Uber from lobbying for protectionist regulations of its own. The only sure way to keep markets open to the next Uber-like innovator is to get the government out of the business of picking winners and criminalizing competition. Not only does government generally do a poor job of it, but entrepreneurial success in America should not be dependent on political connection and favoritism. Nor should new competitors be threatened with costly court battles in every market they try to enter.