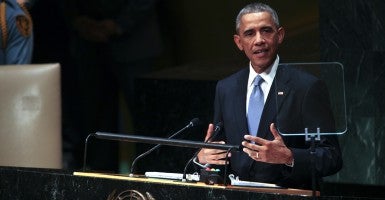 President Barack Obama’s 2014 speech to the United Nations General Assembly today highlighted a number of major crises facing the world today, but it focused particularly on the responsibility of nations “to observe and enforce international norms” and reject “the cancer of violent extremism.”

For instance, he condemned Russia’s action in Ukraine as “a vision of the world in which might makes right – a world in which one nation’s borders can be redrawn by another… America stands for something different. We believe that right makes might — that bigger nations should not be able to bully smaller ones.” He said the U.S. and NATO would assist Ukraine and asked Russia to change direction, but did not call on the U.N. to do anything — an implicit admission that the international system was incapable of action on the matter.

The speech had a far more aggressive tone than most would have expected of Obama even a year ago as he finds himself having to justify a U.S. bombing campaign in the Middle East. He expressed in detail the atrocities of ISIS and other terrorist groups. But again, he weakened his case by repeatedly contradicting himself.

For instance, he asserted that “No God condones this terror. No grievance justifies these actions. There can be no reasoning, no negotiation, with this brand of evil. The only language understood by killers like this is the language of force.” But, he clarified, use of force would be limited and “we [do not] intend to send U.S. troops to occupy foreign lands.”

Where in the world are Christians and Jews doing anything like what ISIS is doing? This moral equivalence shields those responsible from condemnation.

Obama insisted the “United States of America will work with a broad coalition to dismantle this network of death.” But, he assured the assembled delegates, “I have made it clear that America will not base our entire foreign policy on reacting to terrorism. Rather, we have waged a focused campaign against al-Qaeda and its associated forces—taking out their leaders and denying them the safe-havens they rely upon.” So, the “network of death” should not be destroyed, but merely dismantled and denied safe-havens.

Obama dedicated a great deal of his speech to calls for international efforts to counter religious extremism. Yet, his condemnatory remarks were undermined by American political correctness, as when he insisted, “Islam teaches peace. Muslims the world over aspire to live with dignity and a sense of justice. And when it comes to America and Islam, there is no us and them—there is only us, because millions of Muslim Americans are part of the fabric of our country.”

He made strong statements: “There should be no more tolerance of so-called clerics who call upon people to harm innocents because they are Jewish, Christian or Muslim. It is time for a new compact among the civilized peoples of this world to eradicate war at its most fundamental source: the corruption of young minds by violent ideology.” But then he needlessly drew comparisons between the Islamic extremism and Christianity and Judaism with statements such as, “There is nothing new about wars within religions. Christianity endured centuries of vicious sectarian conflict.” Where in the world are Christians and Jews doing anything like what ISIS is doing? This moral equivalence serves only to shield those responsible from the condemnation they deserve.

Finally, his remarks today stand in stark contrast to his remarks yesterday at the U.N. Climate Summit, where he stated, “For all the immediate challenges that we gather to address this week — terrorism, instability, inequality, disease — there’s one issue that will define the contours of this century more dramatically than any other, and that is the urgent and growing threat of a changing climate.”

In today’s speech he dedicated only a few bland sentences to climate change.

The difference between the two speeches mere hours apart was jarring and raises questions about what the president truly sees as the greatest threat to America.