Could ISIS Influence the Future of Liberalism? This Scholar Thinks So. 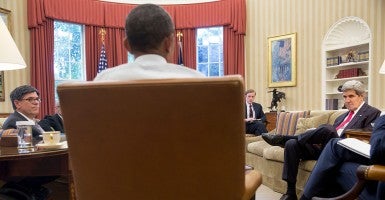 As the United States confronts renewed terrorist threats in Iraq and Syria, a Heritage Foundation expert on America’s founding principles contends that “terrorism at home and war abroad” could curb the future of liberalism.

Speaking yesterday as part of a panel at the think tank discussing where liberalism is headed, David Azerrad also said that if Americans thought prosperity were at stake, they “would lose interest in large segments of the Left’s agenda.”

Azerrad was joined for the event by William Voegeli, senior editor at the Claremont Review of Books, Kevin Williamson, a correspondent for National Review, and–as moderator–Ben Domenech, publisher of The Federalist.

Azerrad and Williamson agreed modern-day Democrats have failed to develop and execute a robust foreign policy, but have thrived in deploying rhetorical strategy to capture the attention of Americans.

But Azerrad, director of Heritage’s Simon Center for Politics and Principles, argued that should the United States be faced with a growing threat of violence from terrorists or another source, tenets of the liberal agenda would be depressed. He said:

Modern liberalism, you see, is just not capable of dealing decisively with issues requiring violence, crime and terrorism at home, and war abroad.

Should the world continue to become a more dangerous place, should the homeland be threatened, or should we witness a return to 1970s levels of violent crime, I think that would put a considerable damper on the prospects of liberalism.”

>>> Watch: Where Is Liberalism Going?

When questioned about whether the Sept. 11, 2001 terror attacks — followed by wars in Iraq and Afghanistan — and then the 2008 economic collapse served as a catalyst for the political change he described, Azerrad noted how quickly Americans returned to the old normal.

“We haven’t had war at home. We had a visually spectacular attack on September 11, but things went back to normal very rapidly. And yes, 2008 was ugly, but look at the quality of life in this country. It’s still pretty extraordinary,” he said, adding:

My only point is that a lot of the Left’s agenda on some of these issues is rather frivolous from a serious political point of view. … If people really felt that [peace and prosperity] were threatened, I think they would lose interest in large segments of the Left’s agenda.

Voegeli, addressing Azerrad’s point, looked to New York City’s leadership over the past 20 years as evidence of the effect of citizens “doubting basic liberal competence.”

“Once you had 20 years under [former Mayors Rudy] Giuliani and [Michael] Bloomberg where the garbage was picked up, where the bills were paid, where the streets were safe, New York felt safe to go back to somebody like [Mayor Bill] de Blasio,”  Voegeli said. Williamson said he agreed with Azerrad on the failure of Democrats’ foreign policy, but disagreed with the notion that a surge in violence and crime would damage the future of liberalism.

The National Review columnist argued that the “Left loves violence” and “wants to use violence to organize every aspect of life.” He cited the phenomenon of conversion therapy in California as an example.

Although Williamson noted that he doesn’t believe in such “pseudoscience,” he said it is against the law in the Golden State even if a person wants it. Gender reassignment surgery — physically changing one’s sex —  remains legal, however.

Azerrad’s statements come on the heels of a liberal Democrat, President Obama, issuing orders for U.S. forces to bomb targets in Syria after authorizing more than 100 airstrikes in Iraq against ISIS, the brutal terrorist group also known as the Islamic State and ISIL.

Secretary of State John Kerry, a liberal Democrat and veteran senator from Massachusetts who was the party nominee for president in 2004, initially insisted that America was not at war with ISIS. Pentagon and White House spokesmen, however, quickly conceded that the nation is at war.

>>> Raw Footage of U.S. Strikes Against ISIS in Syria