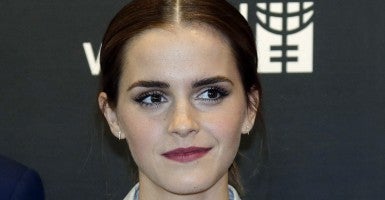 Actress Emma Watson’s U.N. speech on gender equality is all the buzz online, but for the wrong reasons.

Many in the media have spotlighted her focus on the word “feminist” and the negative connotations associated with it–which was just a minor part in the beginning of her speech.

There were two items that most media neglected to cover. The first was Watson’s heavy emphasis on the importance of men, as well as their vulnerabilities.

“To date, I’ve seen my father’s role being valued less by society despite my needing his presence as a child as much as my mother’s,” she said.

The remark was glossed over and easily forgiven by the Left, who take issue with the notion that children require both a mother and father.

Perhaps Watson didn’t even realize the stance she was taking, but she said it honestly and no one who disagreed made a peep about it.

She praised men again later in the speech, saying men are victims of inequality too, “imprisoned by gender stereotypes” of aggression, macho-ness and control.

It was fitting–but unexpected–that she chose to highlight how society’s unrealistic expectations for men are important too.

This message is an important one for all societies, but some countries face far heavier battles than a crisis of self-confidence. Emma Watson speaks at the UN’s He for She event Sept. 20. (Photo: Newscom)

Watson noted that at current rates, it will be the year 2086 before all rural African girls can have a secondary education and 15.5 million girls will be married in the next 16 years, becoming child brides.

Unfortunately, she only briefly touched on what is perhaps the greatest injustice to women on earth–gendercide.

“My life is a sheer privilege because my parents didn’t love me less because I was born a daughter,” said Watson.

What she didn’t say is that many girls never get a chance to live because they are female. In fact, as many as 160+ million women aren’t alive today because they were killed in the womb or after birth for being girls.

China is one of the worst offenders, with some provinces reporting a ratio of boys to girls of 130 to 100. Believe it or not, even in the United States, places like Planned Parenthood have advised clients on how to obtain an abortion if their baby is a girl and not a boy.

It’s wonderful that the media–and specifically, feminist sites like Jezebel–praised Watson’s speech, but they shouldn’t ignore the parts that may have hit them the wrong way.

Liberal feminists (yes, there are conservative ones as well) typically ignore gendercide because it hits too close to their abortion rights agenda. And to proclaim all children need fathers these days is politically incorrect.

But these are two extremely important aspects of gender equality and they deserve to be heard too.