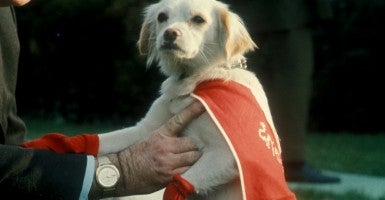 Lyndon B. Johnson's dog, Yuki, dressed up for the wedding of Lynda Bird and Chuck Robb. (Photo: Newscom)

Today is national “Dogs in Politics Day.” Yes–it is an official day, and you can thank former President Richard Nixon for this one (and the tribute to some adorable presidential dogs below).

During Nixon’s campaign for vice president alongside Dwight Eisenhower, the then-senator was accused of stealing thousands from his campaign funds for personal use. He defended himself from the charges before the American public in a Sept. 23, 1952 televised speech that made national news not only for its rare face-time with a national candidate, but because of one specific gift he admitted he refused to turn away–Checkers, a Cocker Spaniel sent to his family from Texas.

The speech–later dubbed the “Checkers Speech”–is now believed to be the moment that inspired Dogs in Politics Day.

We love any reason to celebrate the White House pooches, and are grateful for a bipartisan decision most of the nation’s presidents seem to agree on–dogs make the best White House guests. President Gerald R. Ford and his daughter, Susan Ford, sit on the floor of the Great Hall in the private area of the White House with their golden retriever Liberty. (Photo: Newscom) Although Nixon’s cocker spaniel never lived in the White House, Checkers became a celebrity after then-Sen. Nixon mentioned the dog in a televised speech on Sept. 23, 1952. (Photo: Newscom) President Lyndon B. Johnson takes dogs Him and Her on a walk with the press, Aug. 18, 1964. (Photo: LBJ Library/Cecil Stoughton) The Kennedy family poses with their dogs at Hyannisport: Irish spaniel Shannon, Welsh terrier Charlie, German shepherd Clipper, and the pups of Pushinka, who was a gift to Caroline from Soviet premier Nikita Khrushchev. (Photo: Newscom) President Calvin Coolidge had everything from lion cubs to a goose in the White House. Two of his most famous dogs, Rob Roy and Prudence Prim, are pictured here. (Photo: LOC)