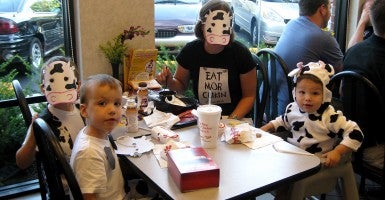 Chick-fil-A, not shy about asking young Americans to “eat mor chikin,” is giving the Happy Meal a run for the money.

And although Chick-fil-A serves far fewer mouths a year than McDonald’s —with 1,800 locations nationwide compared with the hamburger giant’s 35,000 restaurants worldwide—the little guy apparently satisfies a greater portion of customers.

The original Chick-fil-A location in an Atlanta suburb.

Sandelman & Associates, a market research and consulting company specializing in fast food restaurants, interviews more than 100,000 customers of such eateries each year. It asks them to rate chains they’ve patronized in the past three months on 16 attributes of customer satisfaction, including overall appeal to children.

In June, researchers found that Chick-fil-A satisfied 83 percent of customers on “overall appeal to kids,” edging out McDonald’s at 79 percent.

Beverly Cain, senior vice president of operations at Sandelman & Associates, attributed some of that success to Chick-fil-A’s focus on family values rooted in its founder’s evangelical Christian faith.

“They are a chain that has long been known for its family values, so parents feel good about supporting Chick-fil-A,” Cain told The Daily Signal.

Cain pointed to Chick-fil-A’s expansion of play places and “cow-centric, fun advertising,” which she said could be more appealing to kids than some McDonald’s ads.

The chicken chain also is the only one where a child can return or trade in a prize for a dessert. “That helps,” Cain noted.

The Chick-fil-A website states that its Kids Meals offer prizes that “help bring grownups and kids together.” This goes beyond plastic toys to include “activities, games and facts that stimulate young minds and help plant the seeds of good values.” Adding to that, Cain said, Chick-fil-A consistently ranks high in categories such as cleanliness and friendliness, and is appreciated for “highly appetizing” food.

The outgrowth of a diner near Atlanta that founder S. Truett Cathy started in 1946 and a chicken sandwich that he perfected 18 years later, Chick-fil-A continued to expand year by year even as the chain stayed faithful to a tradition of being closed on Sundays.

Cathy, who died Sept. 8 at 93, believed his employees should have an opportunity to rest, spend time with loved ones and worship if they choose to do so.

Certainly, Cain said, these factors all contribute to why Chick-fil-A is able to challenge a fast-food goliath like McDonald’s in customer — including kiddie customer– satisfaction.