The Man Behind the Chicken Sandwich 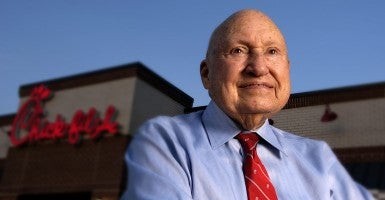 S. Truett Cathy, the founder of the fast-food restaurant chain known for its boneless chicken sandwiches, waffle fries, staunch support for traditional marriage and conservative business plan, died early Monday. He passed away peacefully at home, surrounded by loved ones. Cathy opened his first restaurant in 1946 with his brother in the Atlanta area — Dwarf Grill. It was later renamed Dwarf House, and eventually lead to a 1967 opening of Chick-fil-A. Since then the business has grown to more than 1,800 restaurants across 40 states.

From the beginning, Cathy was determined to infuse his biblical principles into his business. Every store operates with a “closed-on-Sunday” policy. In a statement to the press, Chick-fil-A confirmed the company will remain privately held and closed on Sundays.

Rare within the food service industry, this policy allows employees a day for family, worship, fellowship or rest and also underscores Cathy’s desire to put principles and people ahead of profits. As part of Cathy’s WinShape Homes program—a long-term care program for foster children—13 foster care homes are operated by Cathy and the WinShape Foundation to provide long-term care for foster children within a positive family environment. WinShape Homes has provided a safe and secure home to more than 450 children in which they could grow physically, spiritually and emotionally. WinShape Camps was founded in 1985 as a residential, two-week summer camp to impact young people through experiences that enhance their Christian faith, character and relationships. Each summer, more than 18,000 campers attend WinShape Camps.

Although the chairman and chief executive officer of the chain is now Cathy’s oldest son, Dan, Truett Cathy remained heavily involved until his death. S. Truett Cathy with sons Dan and Bubba in Atlanta, 2005.

In 2008, President George W. Bush presented the Lifetime President’s Volunteer Service Award to Cathy in the Oval Office of the White House. The award was established to recognize the valuable contributions volunteers are making in our communities across America and encourage more people to serve. Cathy also published six books:  “It’s Easier to Succeed Than to Fail,” “Eat Mor Chikin: Inspire More People,” “It’s Better to Build Boys Than Mend Men,” “How Did You Do It, Truett?,” “Wealth: Is it Worth It?” and “The Generosity Factor.” Cathy wasn’t afraid to vocalize his faith and values. His writings and interviews gave an inside look into his leadership philosophy and commitment to stewardship:

“Loyalty of your people is a key to most any business success.”

“Why do we close on Sunday? Well, it started back in 1946 when I opened my first restaurant, a 24-hour coffee shop called The Dwarf Grill. After the first week, I determined that if it took seven days a week to make a living, I should be in some other business. Two, it was my conscience that I had to live with; I just never could come to the idea of dealing with money on the Lord’s Day. I became a Christian at age 12; that’s not to say that everything I’ve done since that time is becoming to a Christian, but I believe the Lord had blessed us because we recognize Him on this special day we call Sunday.”

“It is when we stop doing our best work that our enthusiasm for the job wanes. We must motivate ourselves to do our very best, and by our example lead others to do their best as well.”