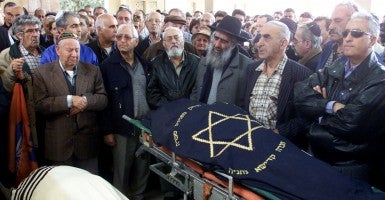 Relatives of Michael and Devora Karim mourn at their funeral in Netanya, March 29, 2002. The Karims, a married couple, were victims of a Palestinian suicide bomber who killed Israelis celebrating the start of Passover in the seaside city of Netanya. (Photo: Havakuk Levison/Reuters/Newscom)

The chairman of Arab Bank, Sabih Al-Masri, is expected to be the first defense witness as a landmark terrorism trial begins its third week in New York federal court.

Three hundred U.S. nationals are suing Arab Bank, claiming it knowingly provided services to terrorists and their financiers in violation of U.S. anti-terrorism law. The plaintiffs and their family members were injured or killed in terrorist attacks while visiting Israel between 2000 and 2005 during the second intifada or Palestinian uprising.

As Arab Bank begins laying out its defense, it argues that the plaintiffs may have shown Hamas to be horrible criminals, but that Hamas is not the defendant; Arab Bank is. Among the evidence introduced by the plaintiffs last week was the confession of convicted terrorist Abbas al-Sayed. He was the mastermind behind the so-called Passover Massacre suicide bombing at the Park Hotel in Netanya, Israel, carried out by Hamas in 2002. It was the deadliest attack of the conflict: 30 people were killed and 140 injured.

According to al-Sayed’s signed police confession, he bought weapons for the attack with money transferred to his private Arab Bank account in Tulkarem in the Palestinian West Bank territory.

“The money was sent from the USA to my account,” reads al-Sayed’s confession, which was introduced in court. “I used to receive the money in monthly payments. Each payment was between $10,000 to $13,000.” Some of the money, he stated, was from a Hamas leader. Arab Bank contends that, with very few exceptions, its customers were not designated as terrorists by the United States, the United Nations or European Union.

The bank plans to call current and former employees to testify that the bank followed proper procedures and was unaware that some of the individuals or charities that it served as customers were connected to Hamas.

The role that financing networks play in the success of murderous terrorist groups is the focus of increasing attention with the emergence of ISIS, the Islamic State in Iraq and Syria.

In a letter last month, Sens. Marco Rubio, R-Fla., and Bob Casey Jr., D-Pa., asked the State Department to designate ISIS as a Transnational Criminal Organization to send a chilling signal to third parties doing business with the terrorist group. The senators’ letter said that ISIS could be earning up to $2 million a day on the black market by selling oil from reserves commandeered in Iraq and Syria.

Arab Bank documents allegedly show that 12 Middle Eastern charities linked to Hamas and other radical Islamic groups transferred $32 million in cash to Arab Bank during the second intifada. The money was then allegedly paid out to families of suicide bombers and other Palestinians who engaged in acts of terrorism against Jews.

Arab Bank says the plaintiffs have not proven that it knowingly provided services to terrorists or that it was willfully blind to the fact.