Should a High School Student Get Suspended for Saying ‘Bless You’? 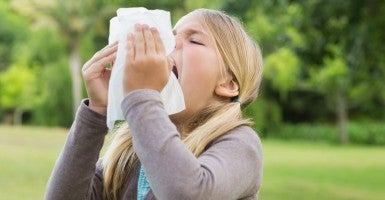 Be warned -- you could be suspended for saying bless you when a classmate sneezes. (Photo: Thinkstock)

That’s what one student at a Tennessee high school is claiming happened to her. Kendra Turner, a senior at Dyer County High School, was given an in-school suspension for breaking a class rule prohibiting the saying of “bless you” after a sneeze.

The school has responded by claiming that Turner shouted “bless you” across a classroom, and was aggressive and disruptive, according to CBS News in Charlotte, N.C. Certainly, schools are allowed to punish students for shouting, or for aggressive or disruptive behavior, but public schools are generally not allowed to have standing policies prohibiting the saying of “bless you.” In this case, it seems that Kendra’s teacher had a list of words and phrases, including “bless you,” written on the classroom board that students were prohibited from saying.

In the 1969 case of Tinker v. Des Moines Independent Community School District, the Supreme Court of the United States held that teachers and students do not “shed their constitutional rights to freedom of speech or expression at the schoolhouse gate.” In that case, three students were suspended for wearing black armbands to silently protest the Vietnam War. That suspension was unlawful, the Supreme Court held, absent evidence that the anti-armband policy were “necessary to avoid material and substantial interference with schoolwork or discipline.”

>>> Check Out Heritage Guide to the Constitution to know your rights.

This teacher’s “no saying bless you” policy, which was enforced by officials at Dyer County High School who handed down the suspension, seems like a similarly unjustifiable policy. What harm can saying “bless you” do that a policy against shouting cannot prevent? In some contexts, such as test-taking situations, it might make sense to enforce a policy of absolute silence to prohibit cheating, for example. But why single out religious speech, or a traditional display of good manners? Lacking a good reason for this policy, it appears that Dyer County High School is in the wrong.

Kendra Turner certainly knew this, voicing her objections and informing her teacher that she had a First Amendment right to say “bless you.” But her teacher said that the term was only for church, and sent her to the school administrator’s office anyway. Thankfully, our Constitution does not banish religious words from public schools — it actually protects them.