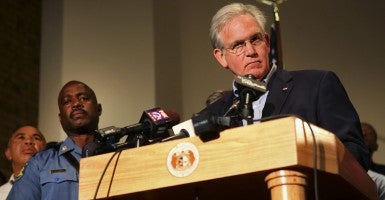 Missouri Gov. Jay Nixon talks about declaring a state of emergency during a news conference Aug. 16 at Greater St. Mark Family Church in St. Louis. At left is Capt. Ron Johnson of the Missouri Highway Patrol, who is in charge of crowd control in Ferguson. (Photo: Newscom)

Missouri Gov. Jay Nixon, who yesterday said he was “thunderstruck” to learn how militarized police in Ferguson had become, signed off  as recently as January on statewide participation in a Pentagon program providing local police departments with surplus equipment.

In authorizing Ferguson police and other local law enforcement agencies to apply for firearms and other equipment, Nixon also directed his administration to “conduct management and oversight of the program,” documents show.

Should Nixon, a Democrat elected in 2008 and re-elected in 2012, have been surprised? Participating jurisdictions, including agencies in St. Louis County, received weapons and equipment as early as 2010 and again in 2012, 2013 and this summer. Ferguson is a St. Louis suburb.

>>> This report was updated to reflect President Obama’s remarks this afternoon.

In an interview yesterday on ABC’s “This Week,” Nixon commented on the images of the Ferguson Police Department using military-style equipment and tactics following protests and riots in the St. Louis suburb after an officer fatally shot Michael Brown, 18, who was black. Nixon said:

I, all of us, were thunderstruck by the pictures we saw. I mean, the overmilitarization, the MRAPs rolling in, the guns pointed at kids in the street. All of that, I think, instead of ratcheting down, brought emotion up.

>>> ‘A Little Aggressive’: Governor Surprised by Militarization of Ferguson Police

Nixon,  the state’s attorney general for 15 years, later called in the National Guard to counter renewed violence, looting, and unrest in Ferguson.

To apply, police chiefs and sheriffs must complete a 1033 application, shown below.  The Missouri application, which has Nixon’s name and title at the top left, is the same for local and state departments, Mike O’Connell, communications director for the Missouri Department of Public Safety, told The Daily Signal.

Included in the application, which was revised last month, is a “State Plan of Operation” between the state and law enforcement agencies. It states:

The Governor of the State of MISSOURI has designated in writing with an effective date of January to implement this program statewide as well as conduct management and oversight of this program.

When a local police chief or sheriff receives the equipment, the application states, they “will be held accountable for their inventory and see the property obtained through this program is used within the guidelines of the program.”

>>> Overmilitarization: Why Law Enforcement Needs to Scale Down Its Use Of Military Hardware and Tactics

The Missouri Department of Public Safety can make random visits to ensure the property is being used correctly by local law enforcement.

The Pentagon began the 1033 program — then under a different name — in 1990, when transferred military equipment was authorized for use in drug-enforcement-related activities. In 1996, its use expanded to include terrorism-related events.

President Obama addressed the Pentagon’s 1033 program late this afternoon during comments on Ferguson in a White House press conference. The president acknowledged that following the 9/11 terrorist attacks, many local law enforcement agencies were  “ill-equipped for a potential catastrophic terrorist attack” and needed better equipment to respond to potential threats. However, Obama said it was time for a review of the program:

I think it’s probably useful for us to review how the funding has gone, how local law enforcement has used grant dollars, to make sure that what they’re – what they’re purchasing is stuff that they actually need. Because, you know, there is a big difference between our military and our local law enforcement, and we don’t want those lines blurred. That would be contrary to our traditions.

Some onlookers said police officers in Ferguson look as if they’re in a war zone, and the scene sparked debate over the need for small police agencies to have military equipment in their arsenals.

Obama also announced today that Attorney General Eric Holder would travel to Ferguson on Wednesday to meet with the FBI and Department of Justice personnel doing their own investigation of the shooting.

Read the application for surplus Pentagon weaponry and equipment approved by Nixon:

Missouri 1033 Application by The Heritage Foundation