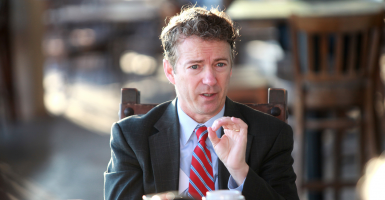 Where does Sen. Rand Paul, R-Ky., stand on the issue of marriage?

If you go to his own website to find out, you’ll come away empty-handed. Marriage isn’t a category in the list of topics under the “Issues” tab. When you simply search the word “marriage” on Paul’s site you get zero findings.

Without a clear position statement, which his site readily provides on Civil Liberties and the Sanctity of Life, among others, one is left to try and figure out his position related to the definition of marriage based on statements he makes in interviews.

In an August New York Times story on libertarianism, Paul was quoted as saying:

“The party can’t become the opposite of what it is. If you tell people from Alabama, Mississippi or Georgia, ‘You know what, guys, we’ve been wrong, and we’re gonna be the pro-gay-marriage party,’ they’re either gonna stay home or — I mean, many of these people joined the Republican Party because of these social issues. So I don’t think we can completely flip. But can we become, to use the overused term, a bigger tent? I think we can and can agree to disagree on a lot of these issues. I think the party will evolve. It’ll either continue to lose, or it’ll become a bigger place where there’s a mixture of opinions.”

A number of questions arise from this statement. Is Paul saying the GOP can’t change its position on same-sex marriage because it’s the wrong position or is it just because it wouldn’t be a good political move? Does agreeing to disagree mean the Republican Party should take no position on marriage? Does Paul think only people in the Deep South care about this issue?

In a 2013 Washington Post article, Paul is quoted as saying:

“I’m an old-fashioned traditionalist. I believe in the historic and religious definition of marriage. That being said, I’m not for eliminating contracts between adults. I think there are ways to make the tax code more neutral, so it doesn’t mention marriage. Then we don’t have to redefine what marriage is; we just don’t have marriage in the tax code.”

Again, what exactly does Paul mean? Is he saying the debate over the definition of marriage is really about the tax code and if we just make that neutral this whole debate will go away? Jennifer Rubin, who wrote the Post column, interpreted Paul’s comments this way, “In other words, let’s get the government out of the marriage business.”  But, is that what he really means?

When asked in Iowa last week if he supported a constitutional amendment to define marriage as between one man and one woman, Paul said:

“I’m in favor of the concept. I am in favor of traditional marriage, and I think that’s been the foundation for civilization for thousands of years. And the loss of the idea of marriage is probably the leading cause of poverty in our country, in the sense that if you have kids before you’re married, your chance of being in poverty is three or four times that of anyone else.”

“I don’t want to register my guns in Washington or my marriage. That may not please everybody but historically our founding fathers didn’t register their marriage in Washington. They registered it locally at the courthouse. I’d rather see it be a local issue, not a federal issue.”

I think this means Paul is opposed to a constitutional amendment. But then why does he say he is in “favor of the concept”?  His reference to the link between family structure and poverty is on target. And as Heritage expert Ryan Anderson says, the defense of marriage is crucial to the libertarian and conservative goal of a more limited government:

“As the American experience over the past fifty years has shown, limiting the size and scope of government is impossible without stable marriages and strong communities. When the family disintegrates, the government attempts to replace its vital functions, social welfare programs multiply, and, as they grow, family and neighborhood bonds erode. A defense of marriage serves the ends of limited government more effectively, less intrusively, and at less cost than picking up the broken pieces of a shattered marriage culture. Fundamentally, then, social and economic conservatism are indivisible.”

But following the Iowa event, the political director of influential conservative group Iowa Family Leader, Greg Baker, said, “I’ve seen him speak a few times. He seems like he’s pretty good on marriage or Israel when I see him and then I see him on TV and he contradicts himself.”

After seeing Paul’s quotes in the Times, Fred Sainz, vice president of the Human Rights Campaign, a gay rights organization, said, “I can’t decide whether to be disturbed or pleased, so I’ve settled on confused.”

I actually think I know where Paul generally stands on marriage – he thinks it is an issue that ought to be decided state by state. But beyond that and how exactly that works with federal laws isn’t clear. Is rewriting the tax code his answer? And what happens if the Supreme Court takes the issue, as it did with abortion in 1973, largely out of the hands of individual states? And how does Paul propose to protect the religious freedoms of those who don’t want to participate in same-sex marriages, which we’re already seeing being threatened?

Sooner rather than later those considering Paul as a presidential candidate in 2016 will need answers to such questions.