Unions Lose and the Public Wins Big in Wisconsin 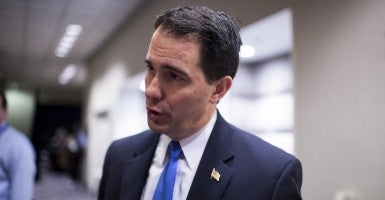 Gov. Scott Walker of Wisconsin had quite a good day on July 31 when the state supreme court upheld not only Wisconsin’s voter ID law, but also the 2011 budget legislation that severely curtailed the power of public unions to control the lives and salaries of state and municipal government employees.

In Madison Teachers, Inc. v. Walker, a majority of the court overturned a lower court decision that had enjoined various parts of the law and upheld it in its entirety. The 2011 law (Act 10) prohibited public unions from bargaining on issues other than base wages; prohibited municipalities from deducting union dues from the paychecks of public employees; imposed annual recertification requirements for unions; and prohibited any union agreement that would require employees who are not members of a union from having to pay union dues.

This ruling represents a huge victory for both Wisconsin taxpayers and the recipients of government services.

In tossing out these claims, the Wisconsin Supreme Court pointed out that, as the U.S. Supreme Court itself has said, public employees have no “constitutional right to negotiate with their municipal employer on the lone issue of base wages, let alone on any other subject.” Collective bargaining is “a creation of legislative grace and not constitutional obligation.” According to the court, “the plaintiffs’ associational rights are in no way implicated” by the law’s change to the state’s collective bargaining framework.

Union member are not restricted in any way from exercising their First Amendment right to associate together: they “remain free to advance any position, on any topic, either individually or in concert, through any channels that are open to the public.” But the union has no constitutional right to force the government to listen to what it has to say – or to require the government to negotiate only with the union.

Furthermore, unions can’t force the government to subsidize them through paycheck deductions for union dues from public employees who are members of the union – “no constitutional right exists for the deduction of dues from a paycheck to support membership in a voluntary organization.”

Unions also have no constitutional right to force employees who do not want to be members of a union to pay union dues. Because none of the challenged provisions involves constitutional rights and public employees are not a protected class, the unions’ equal protection challenge also failed under the court’s rational basis review.

The court also threw out an additional challenge to another Wisconsin law that prohibited the City of Milwaukee from paying the employee share of contributions to the city’s retirement plan.

This ruling, which removes the last legal challenge to Act 10, represents a huge victory for both Wisconsin taxpayers and the recipients of government services. Before Act 10, the Wisconsin state and local governments could not manage their workforces without union consent. Collective bargaining meant government unions had to agree with any changes to how the government operates. Government unions often use this power to hijack the government and make it serve their interests ahead of the public good.

Unions in the private sector cannot ask for too much without their companies prohibitively raising prices and losing customers to competing firms. But the government has no competition—it has a monopoly. Government unions do not have to worry about holding costs down or operating efficiently because the public has nowhere else to go. Without Act 10, Walker would have to either raise taxes or cut programs to balance Wisconsin’s budget.

Unions can’t force the government to subsidize them through paycheck deductions for union dues from public employees who are members of the union.

Government unions could live with either option, of course. What they did not want was what actually happened – eliminating the deficit by trimming their members’ benefits. Wisconsin government employees must now contribute toward their pension benefits and pay a larger portion of their healthcare premiums. They still make more than comparable private sector workers, but that gap has narrowed. These reforms allowed Walker to close a $3.6 billion budget hole and cut taxes by $2 billion.

Similarly union seniority systems meant Wisconsin schools had to lay off the newest teachers first—no matter how well they taught. In 2010 Megan Sampson won statewide recognition for excellence as a first-year English teacher. A week later Milwaukee Public Schools laid her off because the union contract required her to be let go first. That system benefited senior union members at the expense of new hires and children who need the best education possible. Act 10 eliminated this restriction. Wisconsin school districts can now hire and fire on the basis of what works best for the children, not the union members. Act 10 means the government can serve the public instead of unions.