Consensus Grows on Need to Address ICANN Accountability and Transparency 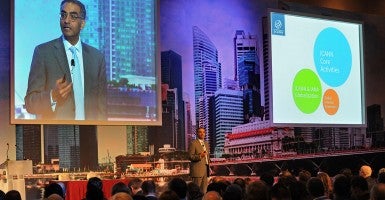 Fadi Chehade, president and CEO of ICANN speaks during the opening of the ICANN Singapore meeting on March 24, 2014. (Photo: Newscom)

Consensus is growing that accountability is the key to success for ICANN—the Internet Corporation for Assigned Names and Numbers.

Earlier this week, the Information Technology and Innovation Foundation, a non-partisan think tank that focuses on technological innovation, joined Heritage in calling for enhanced transparency and accountability before the United States relinquishes its role in managing ICANN.

In March, the U.S. National Telecommunications and Information Administration unexpectedly announced it did not intend to renew its contract to manage core functions of the Internet and mandated the organization consult with “global stakeholders” to agree on an alternative to the “current role played by NTIA in the coordination of the Internet’s [Domaine name system].”

The issue of Internet governance is critically important both economically and politically, and two broad concerns must be addressed: (1) preserving the freedom and vitality of the Internet from governments that would like to restrict it and (2) ensuring ICANN is sufficiently accountable and transparent in its decision-making, consultation and operation.

The first concern is the most obvious. Many nations, such as China and Russia, have made no secret of their desire to limit speech on the Internet that is critical of or damaging to their interests. Even some democratic nations have supported limiting undesirable speech or limiting economic freedoms online. And international organizations such as the International Telecommunication Union, an arm of the United Nations, have expressed a strong interest in playing a role in Internet governance. NTIA has explicitly disallowed any proposal that would replace NTIA’s role with a “government-led or an inter-governmental organization solution.” Congress and the administration must remain firm on this principle.

The second concern is less obvious, but potentially just as serious. ICANN could—either in bowing to political pressure or of its own volition—abuse its authority by limiting or favoring certain domain names, neglecting service of domain names of politically disfavored groups, facilitating efforts to censor content, expanding its activities beyond core activities to financing Internet access in developing countries, or leveraging its market dominance to gauge registrars, registries or users.

Currently, accountability and transparency in ICANN is lacking, and interested parties have voiced their concern. At a London meeting this past June, the ICANN’s Generic Names Supporting Organization issued an unprecedented unanimous statement expressing unease with ICANN’s current lack of transparency and accountability.

Over the weekend, ITIF issued a detailed set of principles on how ICANN can be made more accountable. They include separation of policy making, dispute resolution and implementation; enhanced transparency of ICANN deliberations and activities through publicly available independent audits and details of ICANN board meetings; restricting revenue and budget to core activities; and increasing the threshold necessary for final approval of policy decisions. Importantly, ITIF calls for these accountability steps to be taken before NTIA allows the current ICANN contract to expire.

The principles outlined by ITIF are consistent with those recommended by Heritage Foundation analysts in June. The Heritage analysts recommended the U.S. not end its role in the assignment of Internet names and numbers before adequate checks and balances are put in place to ensure that an independent ICANN acting without U.S. oversight is transparent and accountable and cannot be hijacked by governments or intergovernmental organizations.