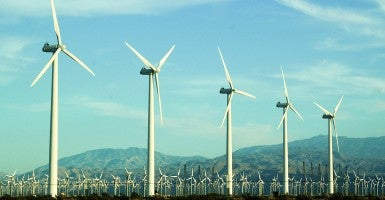 But critics such as Sharon Klemm get real on the U.S. Fish and Wildlife website: “Why don’t you call it what it is? Shooting eagles. Killing Eagles. Murdering Eagles.”

The backlash over a controversial 2013 government rule exempting wind farms from prosecution for the unintentional deaths of bald and golden eagles—for up to three decades—continues to play out in emotional online comments.

“Eagles along with other birds are being chopped out of the air and suffer horrible injuries and death by the blades of high-speed wind turbines,” wrote Patricia Lewko. “This practice has been given a green light by this administration in the name the name of Clean or Green Energy. … What is so clean about chopping up birds to either lie in agony or be mutilated?”

Bald eagles were removed from the endangered species list in 2007, yet killing bald and golden eagles remains a felony punishable by a $250,000 fine and prison time.

“As the nation seeks to increase its production of domestic energy, wind energy developers and wildlife agencies have recognized a need for specific guidance to help make wind energy facilities compatible with eagle conservation and the laws and regulations that protect eagles,” according to the wind energy development section on the U.S. Fish and Wildlife website.

In 2009, the agency first instituted a permit system to allow exemptions from prosecution—for five years—for wind farms and certain other projects that inadvertently harm or kill eagles. Last year, it extended the duration of permits for “non-purposeful take of eagles” to 30 years, responding to pressure from the wind industry to provide more certainty for investors.

“The industry suffers a lot from uncertainty about policy of all sorts, environmental as well as tax policy, and a variety of things like that,” said Dan Turner, an analyst with Windustry, a Minneapolis renewable energy advocacy group. “It’s very hard to plan, especially these major projects that take multi-years, if you don’t know what the policy is going to be. It might just close you down.”

There’s no requirement to obtain the permit, but wind farms and other potential threats to eagles risk prosecution without one. Opponents will get the chance to discuss their concerns during five public meetings across the country to reconsider eagle-kill permits.

Estimates vary widely on the collateral damage to eagles, bats and birds that tangle with wind turbines. A recent Wildlife Society survey estimated 1.4 million bat and bird fatalities annually, including 83,000 raptors. In the past five years, wind farms have destroyed at least 67 eagles, mostly golden eagles, according to a 2013 government report.

Tom Steward is a reporter for Watchdog.org, a national network of investigative reporters covering waste, fraud and abuse in government. Watchdog.org is a project of the nonprofit Franklin Center for Government & Public Integrity.