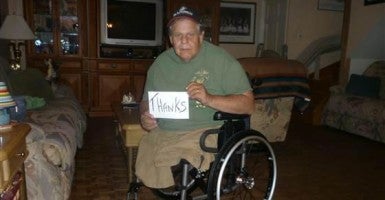 A thank you letter written by Michael Sulsona of Staten Island, New York–a double-amputee, who had stepped on a landmine during a tour in Vietnam and subsequently lost both his legs–has made waves across news outlets and social media.

In the letter, Sulsona wrote expressing his gratitude to three Lowe’s Home Improvement employees for helping repair his wheelchair that had fallen apart in their store.

“Three employees, David, Marcus, and Souleyman, jumped to my assistance immediately…” Sulsona wrote, adding that, “They took the wheelchair apart and replaced the broken parts and told me, ‘We’re going to make this chair like new.’”

According to Sulsona, this had not been the first time his wheelchair fell apart. He noted how he had been waiting for two years to receive a replacement from the Veterans Administration.

According to SILive.com, the VA sent Sulsona a new, customized wheelchair on Tuesday, after the letter had already gone viral.

In response to the VA, which told Buzzfeed that the office was “sorry to hear about the reported circumstances surrounding Sulsona’s request for a new wheelchair,” the Vietnam veteran said: “I’d hate to cheapen what these guys did, but isn’t that their job? I should have had the chair I was entitled to, but because of red tape, I never got a chair until now.”

Even so, Sulsona sought to keep public attention focused on the good deeds of those three men who wanted to help a fellow citizen in need–or, in his words, “who still believe in stepping to the plate.”

In the letter, Sulsona wrote, “They didn’t ask any questions, didn’t feel the need to fill out any forms or make phone calls. Someone needed help and they felt privileged to be given the opportunity.”