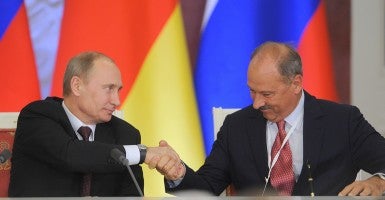 Two of the four Russian firms targeted for economic sanctions by President Obama this week received substantial subsidies from the Export-Import Bank. The financial ties highlight the complications inherent in U.S. taxpayer-financing of state-controlled outfits overseas.

The president’s announcement of new sanctions on Wednesday followed weeks of warnings that Russia would face consequences for the crisis in eastern Ukraine. Pro-Russian separatists appear to be responsible for the downing of a Malaysian airliner that killed 298 passengers and crew, Obama said today.

The latest round of sanctions involve two major energy firms, Novatek and Rosneft, as well as two state-controlled financial institutions, Vneshekonombank (VEB) and Gazprombank. The firms will be restricted in raising capital from U.S. investors. Previous sanctions imposed travel bans on influential Russians and the freezing of commercial assets.

VEB is a development bank that underwrites infrastructure and technology projects. It also “owns” two other public institutions, Roseximbank and EXIAR, which provide credit insurance and financing to Russian exporters.

In 2012, Ex-Im approved a 12-year loan guarantee of $497 million to VBE to finance the purchase of Boeing aircraft for Aeroflot Russian International Airlines. Boeing is the largest beneficiary of Ex-Im subsidies. The sanctions do not appear to have any bearing on the deal.

Gazprombank, which finances energy projects, was awarded an Ex-Im loan guarantee of $22.6 million (for five years) in 2003. The funds were intended to purchase mining equipment for the Razrez Raspadsky open-pit coal mine. The bank’s Web site featured a response to the sanctions, which stated: “Sanctions declared by the USA administration against certain Russian companies and banks, including Gazprombank, contemplate only restrictions on the access by US investors to long-term (over 90 days) debt instruments of the Gazprombank issued after 16 July 2014.”

Ex-Im’s dealings with some of Russia’s richest and most powerful state-controlled enterprises raises troubling questions about bank operations. Faced with a bruising fight for reauthorization, Ex-Im officials are attempting to persuade Congress that the bank is a vital source of financing for small business. In actuality, the biggest beneficiaries are multinational corporations that could easily access private investment. News that taxpayers have subsidized the very same state-controlled enterprises that the Obama administration is now sanctioning hardly makes a convincing argument for keeping the bank in business.