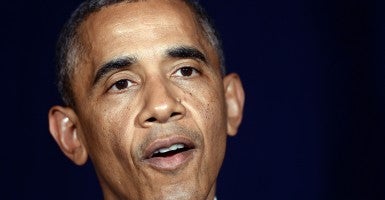 Sen. Jeff Sessions, R-Ala., said President Obama would rather play politics than follow the law to remedy the humanitarian crisis festering at the southern border.

“This is a direct failure of presidential leadership,” Sessions said Thursday at the Eagle Forum’s annual leadership conference. “I’ve never seen anything like this steadfast refusal to follow the law.”

Session said the president’s refusal to deport young illegal immigrants gathering at the border lends credence to the amnesty rumors in Central America that fuel the crises. He said if Obama instead would “establish clarity,” it would cause all the “anger and frustration would go away.

“We are not opposed to immigrants—we admit a million people a year,” he said. “We’re a generous nation and we believe in immigration, but it’s unthinkable not to have a lawful process.”

Sessions said Obama should take a play from his predecessor’s playbook and draw a hard diplomatic line. According to Sessions, the George W. Bush administration reduced illegal arrivals by two-thirds in three months and by 90 percent within six months by taking a “firm stand” during a similar crisis with Brazil.

But Obama, Sessions said, is more concerned with political victories and pushing his own agenda. Although the White House initially sought a legislative solution, Sessions expects the president will “start a media campaigns to say it’s Congress’ fault.”

According to Sessions, Obama has communicated to lawmakers that “if you won’t give me amnesty, I won’t enforce the law.”