Obama Seeks $3.7B to Meet Surge of Kids Crossing Border 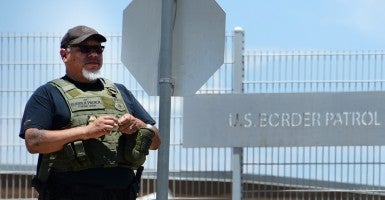 Border Patrol agents keep watch outside the agency's facility in Murrieta, Calif. , a destination for many of the illegal border crossers. (Photo: Robyn Beck/AFP/Newscom)

President Obama has asked Congress for $3.7 billion in “emergency” funds to stem a surge in children and families from Central America illegally crossing the U.S. border with Mexico.

Obama’s request is nearly double the amount he originally signaled last week. Most of the money in his request, made public today, would be used for detention facilities to hold the children and other border crossers from Guatemala, El Salvador, and Honduras.

Romina Boccia, The Heritage Foundation’s Grover M. Hermann fellow in federal budgetary affairs, objected to what she calls the Obama administration’s using an “emergency” designation to try to get around a spending cap set by Congress:

Despite impressions given by some lawmakers and the administration, Congress has a massive budget at its disposal for domestic activities, including for border security efforts. Congress should not authorize an additional $3.7 billion in deficit spending.

If Congress chose to support the Obama administration’s approach to dealing with the surge in unaccompanied minors, there is no reason why Congress could not do so within the current $492 billion cap under the Budget Control Act.

Still, several Democrats have rallied around the Obama proposal.

“I commend the Administration for doing what it can to quickly address this surge of children and families attempting to enter our country, and I urge my colleagues in Congress to support it,” said Sen. Tom Carper. D-Del., who chairs the Homeland Security and Governmental Affairs Committee, in a statement.

Agencies that would receive the funds include the departments of Homeland Security, State, Health and Human Services, and Justice.

Notably, Obama did not ask Congress to change a 2008 law — passed unanimously and signed by President George W. Bush — that requires unaccompanied children from Central America to be provided housing, united with relatives, and scheduled for a hearing in immigration court.

Obama had indicated last week that he would seek to revise the law, the William Wilberforce Trafficking Victims Protection Reauthorization Act, to allow for accelerated deportations of children from Central America — as can be done with those who cross into the U.S. from Canada or Mexico.

On Thursday, the Senate Appropriations Committee is scheduled to be the first congressional authority to have a hearing on the president’s spending request.

Some details as provided by the White House:

Ana Quintana, research associate for Latin America at at The Heritage Foundation, said she has “serious issues” with the president’s proposal to allocate $295 million to the State Department’s Economic Support Fund. Noting that the money “is supposed to assist in reintegrating these kids and address the root causes of migration,” Quintana said:

Aside from repatriation being outside of [the fund’s] scope of responsibility, $295 million is almost double what was allocated to Central America in fiscal year 2014 and was distributed among both security and economic development programs. Additionally, this funding is guided on the false belief that economic prosperity can exist without safe and secure cities.