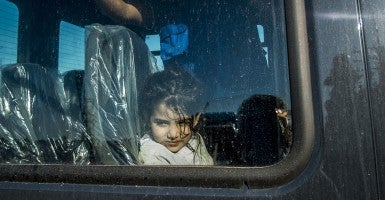 Of the more than 24,000 unaccompanied children who entered the United States illegally last year, most haven’t left — even those who were detained.

“Eighty-seven percent of those are still here in [court] proceedings because we have no final orders,” said Tom Homan, executive associate director of enforcement and removal operations for U.S. Immigration and Customs Enforcement, testifying yesterday before the House Judiciary Committee.

And the problem has gotten worse this year – more than 52,000 minors traveling without their parents have been caught crossing the southwest border since October, including a record 9,000 in May.

The children, most of whom come from Central America, are processed in Nogales, Ariz., before moving to the care of the U.S. Department of Health and Human Services, which oversees detention shelters and works to find parents or guardians in the country.

An HHS official today confirmed to The Daily Signal that an unaccompanied minor being housed at Joint Base San Antonio-Lackland, Texas, was hospitalized and diagnosed with H1N1, or swine flu, which is contagious. The  official, calling it an isolated case, said the child is responding to treatment and being monitored.

As politicians on both sides point fingers – the title of yesterday’s House hearing, “An Administration-Made Disaster: The South Texas Border Surge of Unaccompanied Alien Minors,” spoke to that – border officials charged with managing the crisis say the facts on the ground are more clear.

“Only one thing can end the frenzy of law-breaking at the border – an end to the ‘catch-and-release policy’ for illegal-alien juveniles,” Mark Krikorian, executive director of the Center for Immigration Studies, told The Daily Signal. Krikorian added:

Every illegal alien caught at the border must be detained until his hearing, so that word gets back to Central America that it’s no longer worth making the trip.

President Obama has added capacity to process and place the border crossers, directing Homeland Security Secretary Jeh C. Johnson to coordinate assistance from various sections of the government, including HHS,  Immigration and Customs Enforcement, the Federal Emergency Management Agency, and the Coast Guard. Even so, officials at the border say, they face a shortage of manpower.

‘Motivated by Rumors of Amnesty’

Officials, based on recorded interviews with the children, can’t definitively declare a reason for the surge. But  those who testified said misinformation about current U.S. immigration law and the prospect of amnesty for illegal immigrants have been motivators.

“Reports from ICE officers and agents on the ground corroborate reports that the majority are motivated more by rumors of amnesty than the situation in their countries,” said Chris Crane, president of National ICE Council 118 of the American Federation of Government Employees. The union leader added:

Impoverished countries don’t read our laws or read cut-off dates. This crisis is putting a tremendous strain on ICE ERO [Enforcement and Removal Operations] and its limited manpower and resources nationwide.

“We are adequately staffed to process them, but we have to strip the line to do it,” Judd said. “The actual border takes a hit because we have to take people out of the field to do it.”

The influx of child migrants has spotlighted another shortage: a lack of immigration judges.

Homan said that once the children arrive here, they likely won’t leave for a while – if at all – because there are too few immigration judges to see them.

Each child receives his own hearing. Most of the children do not have lawyers, though they have the right to a counsel at their own expense.

‘They Blend Into the Community’

But just bringing the children to court can be a challenge, because Border Patrol agents sometimes have no means to verify their identity.

“Most will never appear in court,” Judd said. “They fail to appear and then they blend into the community. The chance they are deported is small.”

Some of the children – and separately, women traveling with children – seek asylum. Based on a screening interview with the border crossers, an officer determines whether a credible fear exists.If so, the officer may refer the minor or adult to an asylum hearing at an immigration court.

Ronald Vitiello,  deputy chief of border control for customs and border protection at the Department of Homeland Security, said unless the children carry documentation or have prior history in the U.S., agents can’t confirm their ages and names.

Most of the minors say they are between 14 and 17 years old, though some report being as young as 5.To add to the challenge, children under 14 cannot be fingerprinted under U.S. law.

The White House announced plans to expedite removals and said it will expand use of monitoring devices such as ankle bracelets to track the illegal immigrants while they wait for court proceedings.

Vice President Joe Biden traveled to Guatemala on June 20 to meet with regional leaders and ask for help quelling rumors of achieving legal status in America.

This week Johnson, the DHS secretary, sent an open letter warning Central American parents who consider sending their children here: “There are no ‘permits’ or free passes at the end.”

Janet Murguia, president and CEO of the National Council of La Raza, said the reason for the crisis is “abundantly clear,” but the solution is more complex. The head of the Hispanic civil rights organization said that solution involves “not just law enforcement and U.S. domestic policy, but also U.S. foreign policy and the participation of international agencies.”

Marguia said a new plan from Sen. Bob Menendez, D-N.J., “is an important step forward in addressing this crisis,” adding:

It calls for, among other things, focusing immediately on the welfare of the children, cracking down on smugglers and a renewed emphasis on fostering social and economic development in the region.

Altogether, the border surge brings circumstances different than years past.

This batch of border crossers likely don’t have criminal intentions, officials addressing the surge said, because they don’t try to be elusive. They come, rather, because they know they can stay.

“They are giving themselves up,” Vitiello said.