House to File Lawsuit Against Obama Over Executive Actions 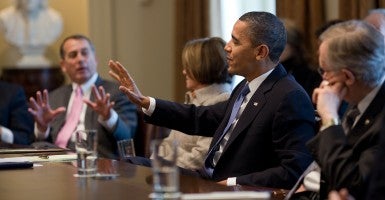 House speaker John Boehner said today the House will file a lawsuit against President Barack Obama regarding his use of executive actions, according to a report from Roll Call.

“This is about defending the institution in which we serve,” Boehner said. “What we’ve seen clearly over the last five years is an effort to erode the power of the legislative branch.”

“I believe the president is not faithfully executing the laws of our country,” he added, “and [on] behalf of the institution and our constitution, standing up and fighting for this is in the best long-term interest of the Congress.”

During his presidency, Obama has utilized his executive authority to push through several initiatives without obtaining the approval of Congress, including hiking the minimum wage for federal contractors.

>>> 7 Times Obama Ignored the Law to Impose His Executive Will