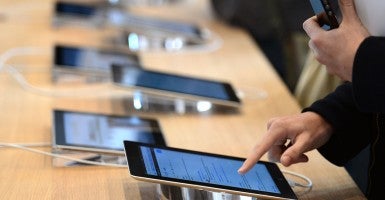 A customer uses a tablet while holding a smartphone. (Photo: Hertzog/AFP/Newscom)

Tension between federal and state powers over a permanent ban on Internet access taxes took the spotlight this week on Capitol Hill.

Unless Congress votes to extend it, a moratorium banning state and local governments from taxing Internet access, first enacted in 1998, will expire Nov. 1.

The Permanent Internet Tax Freedom Act the House Judiciary Committee debated Wednesday not only would make the ban permanent, it also would ban “multiple and discriminatory taxes on electronic commerce.”

Committee members voted 30-4 to send the legislation to the full House of Representatives, but not before a serious debate on the federal government’s power to restrict state and local government’s ability to raise taxes.

Rather than instituting a permanent ban, Rep. John Conyers, D-Mich., said he had hoped to continue with a temporary moratorium that could be revisited by Congress.

Supporters said Congress still could revisit the law in the future if needed.

In a blog post published on Tuesday, Amy McLean, director of advocacy communications of MyWireless.org, a consumer advocacy organization affiliated with the wireless industry, called the hearing “good news.”

“As we blogged about last week, extending the moratorium on taxing Internet access is crucial to ensuring that Americans have affordable and wide-spread access to the Internet,”said McLean.

MyWireless.org organized a petition that received thousands of signatures from citizens and signed on to a coalition letter that urged Congress to support the permanent ban.

In recent years, the federal government and state governments have been locked in a struggle over whether states could impose and enforce online sales tax laws.

“Since the Internet tax moratorium first went into effect, the Internet has expanded its reach beyond the imaginings of 1998, growing from a promising new technology to an integral part of the U.S. economy and American society,” said James Gattuso, senior research fellow in regulatory policy at The Heritage Foundation.

“Continued success, however, would be threatened if state and local tax collectors are allowed to target the Internet for taxation,” Gattuso added. “Making the moratorium a permanent ban would keep that from happening.”