Where Was Obama During the Benghazi Attack? 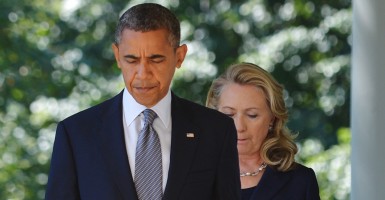 President Obama and then-Secretary of State Hillary Clinton at the White House on Sept. 12, 2012, a day after the Benghazi attack. (Photo: Mandel Ngan/AFP/Newscom)

It’s a question many have asked, but which might not be answered anytime soon: Where was President Obama the night of the Benghazi terrorist attack?

In a conference co-hosted by The Heritage Foundation and the Benghazi Accountability Coalition, a panel of legal and military experts weighed in on the significance of such details.

Where was President Obama night of the Benghazi attack?

Retired Lt. Gen. Thomas G. McInerney said the president’s timeline matters because Obama is the only person qualified to give “cross-border authority.” In the case of Benghazi, he said, it’s extremely important to account for his whereabouts because “nothing was done” in response to the 8 1/2-hour firefight that killed four Americans, including U.S. Ambassador Chris Stevens.

What the president could have done, said McInerney, is ordered the launch of F-16s and tankers. “They could have been airborne in two hours.”

>>> How the New Benghazi Committee Can Drive the Investigation Forward

According to former National Security Council spokesperson Tommy Vietor, Obama was not in the situation room that night, as he was the night Osama bin Laden was captured. Marc Thiessen wrote in the Washington Post that White House records show three men–Michael Donilon, David Ginsberg and Ron Klain–visited the president that night to prep him for his first debate with Mitt Romney.

Former U.S. Attorney Joe diGenova offered yet another theory at the Heritage event. “These people actually went home and went to bed in this administration. The president might have actually gone to bed a lot earlier than everybody else.”