Administration’s Statements Not Adding Up on the Border 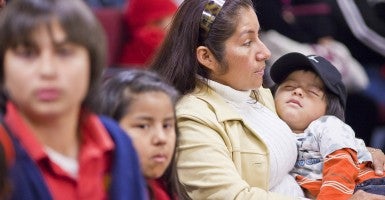 An immigrant mother and her son at the Arizona Capitol. (Photo: Jack Kurtz/Zuma Press/Newscom)

You know things aren’t going well when the only people using your talking points are you. That is increasingly where the Obama administration finds itself in explaining the massive influx of illegal minors crossing the U.S. southern border.

The White House line follows two paths. The first is that there is unrest in Central America, and crime and violence are a major reason these children seek refuge in the U.S. The second is that these children have been given incorrect information that they will be allowed to remain in the U.S. if they successfully cross the border.

Sadly, the first line is true, and the second one is false.

There is no doubt Central America, particularly Honduras, El Salvador and Guatemala, are wracked with drug violence and poverty. Honduras has the worst death rate in the world, 90.4 out of 100,000 inhabitants. El Salvador is No.4 with 41.2 and Guatemala is fifth with 39.9.

What’s new is not the unrest in Central America. And that is why the talking points from Team Obama aren’t adding up for people inside and outside Washington who are following the story and looking at the facts.

Sen. Dianne Feinstein, D-Calif., sent two staffers to a border processing center in Nogales, Ariz., to interview children held there by the Border Patrol. Her statement, and her staff’s findings, completely contradict the talking points coming out of the White House. According to Feinstein, many of the children told her staffers they were smuggled across the border after their parents heard radio ads promising they would not be deported. “My staff also heard that religious organizations are spreading the same message,” she said.

The Border Patrol is hearing the same thing. The Washington Post obtained a Border Patrol memo that summarized interviews with 230 women and children from Central American now in custody. Its findings:

The main reason the migrants had crossed into the United States was “to take advantage of the ‘new’ U.S. law that grants a free pass or permit” from the government, referred to in their home countries as “permisos,” the memo stated. Gang-related violence, economic hardship and domestic abuse also were cited as reasons for the exodus from Central America. But “the subjects also indicated that ‘everyone’ in their home countries is aware that ‘permisos’ are being issued to family units in south Texas.”

Asked by Univision over the weekend whether what those families are hearing—that children who make it into the United States won’t be deported—U.S. Rep. Henry Cuellar, D-Texas, admitted it probably was. “We know, practically, that they are not going back,” he said. “They are going to be here, part of the United States. That is what we are seeing.”

Not only does Obama not enforce our existing immigration laws, he adds to the problem with executive orders, such as the Deferred Action for Childhood Arrivals, which delays the deportation of thousands of minors who have come to the U.S. illegally.

As has been reported by numerous local and national media outlets, the word on the street is that if you get in, you can stay. And that’s the perception because that is the reality.

And that is why the words from Homeland Security Secretary Jeh Johnson, speaking at a congressional hearing last week, ring hallow. “Those who cross our border today illegally, even children, are not eligible for an earned path to citizenship,” Johnson said. “Those apprehended at our borders are priorities for removal…regardless of age.”