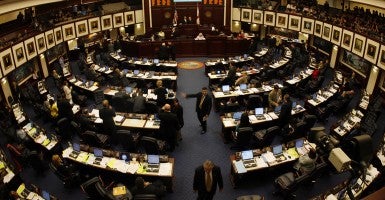 An overall photo from the fifth floor gallery of the floor of the Florida House of Representatives. (Photo: St Petersburg Times/Tampa Bay Times/ZUMAPRESS.com)

On Thursday, senators in the state legislature in Florida voted to discriminate against American citizens by granting in-state tuition for Florida colleges and universities to students who are illegally in the United States. Illegal aliens who have attended a Florida public school for at least three years will now be eligible for benefits traditionally reserved for citizens who possess legal residence in the state. Although Florida is not the first state to pass such a law, it is disappointing to see another example of a state violating federal law in order to promote bad (and unfair) public policy.

As Heritage previously highlighted, federal law prohibits state colleges and universities from providing in-state tuition rates to illegal aliens “on the basis of residence within the State”—unless the same in-state rates are offered to all citizens of the United States. This requirement is found in Section 505 of the Illegal Immigration Reform and Immigrant Responsibility Act, 8 U.S.C. § 1623, which was signed into law by President Bill Clinton in 1996.

Not only does Florida’s proposed new law deny this equal benefit to students from other states, it also contradicts existing rules set forth by the Florida Board of Education for K-12 schools. The Board requires any student seeking enrollment in a Florida public school to provide “official documentation [proving] that the parent(s) or guardian(s) is a legal resident(s) of the school district attendance area.” Although, a student who has attended a Florida school for three years is eligible to receive in-state tuition under the new law, this rule clearly states that only legal residents are permitted to attend Florida public schools.

Providing government benefits to illegal residents in Florida, while failing to extend similar benefits to American citizens who reside in another state, is not only a violation of federal law, but shows a visceral contempt for the rule of law. This kind of indifference to the law serves only to encourage increased illegal immigration because those entering the country illegally now know that they can receive the same benefits as legal residents in many states. It is also fundamentally unfair to students from other states who are legal U.S. citizens, and Florida’s taxpayers who are forced to subsidize education for illegal immigrants.

Granting in-state privileges to illegal aliens, and not residents of a neighboring state, like Georgia, provides these illegal students an incredible advantage over American students who may happen to live just across state lines. Imagine an Alabama student whose family has gone through the bureaucratic, often arduous, process of gaining citizenship, only to see families that have not taken the same honest route and refused to comply with the law receiving benefits that the Alabama family, as legal residents and citizens, are denied in Florida. On top of that, Florida’s taxpayers are now being asked to bear the burden of subsidizing education for illegal residents who often do not pay taxes. This is incredibly costly for states and it is also something the public does not support—polls show a majority of Americans oppose providing in-state tuition to illegal aliens.

This law is almost certainly a push by Florida legislators to appeal to the state’s large Hispanic population ahead of this year’s midterm election. In fact, Gov. Rick Scott (R), who is supporting the bill, is facing reelection this year against former Gov. Charlie Crist (D). It is unfortunate that Florida politicians feel they have to pander to their constituents, because in doing so, they are violating federal law, promoting illegal immigration, and placing an unfair burden on Florida taxpayers. Opponents are right when they say this rewards lawbreakers. As state Sen. Kelli Stargel (R) said, “This is not about access; these kids have access. They are not Floridians. They are not even U.S. citizens.”

Scott and the legislators supporting this legislation, as well as others who have spoken out for it including former Gov. Jeb Bush (R), are providing quite a lesson for otherwise qualified, law-abiding citizen students from other states: those students and their families will continue to pay punishingly-high, out-of-state tuition while individuals who are here illegally are rewarded with what amounts to taxpayer-funded government benefits for breaking the law.

This piece has been modified.