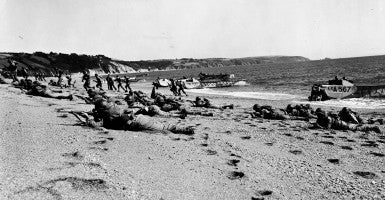 American troops landing on Slapton Sands in England during rehearsals for the invasion of Normandy. (Photo: Library of Congress/Wikimedia)

Seventy years ago, U.S.-led western allies invaded Normandy in an effort to liberate Europeans from Nazi power during World War II. June 6, 1944 ultimately brought down Nazi Germany. We remember those who fought for freedom today. Negro assault troops await orders D-day to attack enemy shortly after they had come ashore at Saipan in the Mariana Islands. (Photo: National Archives via Wikimedia) Soldiers of the 16th Infantry Regiment, wounded while storming Omaha Beach, wait by the chalk cliffs for evacuation to a field hospital for treatment. (Photo: US Army/Flickr) A convoy of landing craft nears the beach at Normandy. (Photo: US Army/Flickr) Army Air Corps photographers documented D-Day beach traffic, as photographed from a Ninth Air Force bomber on June 6, 1944. Note vehicle lanes leading away from the landing areas, and landing craft left aground by the tide. (Photo: US Army/Flickr) Ships carry Soldiers and equipment across the English Channel toward the coast of Normandy. (Photo: US Army/Flickr) Sidney Alexander Parker’s wartime ship, infantry landing craft LCI(L) 246. He was second in command of the vessel which was involved in the D-Day landings of 1944. (Photo: Roger Marks/Flickr) A paratrooper boards an airplane that will drop him over the coast of Normandy for the Allied Invasion of Europe, D-Day, June 6, 1944. Soldiers of the 82nd and 101st Airborne Divisions parachuted behind enemy lines during the night, while fellow Soldiers assaulted Normandy beaches at dawn. (Photo: US Army/Flickr) Soldiers crowd a landing craft on their way to Normandy during the Allied Invasion of Europe. (Photo: US Army/Flickr) German troops surrender to Soldiers during the Allied Invasion of Europe. (Photo: US Army/Flickr) Pfc. Scott Simpson, a medic with Headquarters Company, 173rd Airborne Brigade Combat Team, holds a copy of his grandfather’s military identification card from World War II on Normandy’s Utah Beach, June 4. His grandfather landed on the beach with the 4th Infantry Division as part of the third wave of Operation Overlord, on June 6, 1944. (Photo: US Army/Sgt. Fay Conroy) Soldiers of the 8th Infantry Regiment, 4th Infantry Division, move over a seawall on Utah Beach. (Photo: US Army/Flickr) Members of a landing party help injured Soldiers to safety on Utah Beach. (Photo: US Army/Flickr) Hundreds of dead soldiers in stretchers covered with a blankets after D-Day. Killed during Normandy landings, they lie in a temporary cemetery on the cliff of Colleville-sur-Mer, overlooking Omaha Beach, ca. June 8-10, 1944. This scene took place a little west of the permanent Normandy American Cemetery and Memorial. France, World War 2. (Photo: Newscom) Rows of white crosses in the Normandy American Cemetery and Memorial mark the graves of the thousands of U.S. Servicemembers who gave their lives during the D-Day invasion of June 1944. (Photo: Spc. Adrienne Killingsworth)