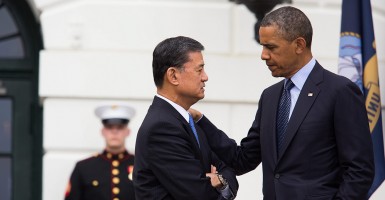 Eric Shinseki resigned this morning as the government’s top advocate for military veterans amid a growing scandal over widespread mismanagement and long waits at hospitals run by the Department of Veterans Affairs.

President Barack Obama, speaking in the White House Briefing Room after meeting face to face with Shinseki, reluctantly announced that he had accepted his resignation as VA secretary.

Obama said Sloan Gibson, a VA deputy secretary who assumed his current job in February, will serve in the Cabinet position as interim secretary until he decides on a permanent replacement.

A preliminary report released Wednesday by the VA’s inspector general revealed officials at the department’s hospitals had manipulated waiting lists to cover up delays in scheduling appointments for veterans seeking medical treatment.

The president said Shinseki told him he was “disappointed the bad news did not get to him” from subordinates. He accepted Shinseki’s resignation “with considerable regret,” Obama said:

His commitment to veterans is unquestioned. I want to reiterate he is a very good man. He is a good person who has done exemplary work on our behalf. He told me the VA needs new leadership to address the problems. He doesn’t want to be a distraction.

The inspector general’s report particularly focused on mismanagement at the agency’s medical center in Phoenix.

Before he resigned, Shinseki told Obama he had begun the process of firing many of those responsible for the problems in Phoenix, and had canceled performance bonuses.

A retired four-star Army general, Shinseki had served as VA secretary since the president took office in 2009.

In a speech earlier today to a group serving homeless veterans, Shinseki said he concurred with the inspector general’s conclusion that deficiencies extend throughout the VA’s 1,700 health care facilities nationwide.  “I was too trusting of some” in the VA system, he said.

At that time, Shinseki gave no indication he would resign, but calls for him to do so proved tough to overcome.

Pete Hegseth, CEO of Concerned Veterans for America, a nonpartisan nonprofit that has been an outspoken critic of Shinseki, issued a statement:

Concerned Veterans for America fully supports President Obama’s decision to accept Sec. Shinseki’s resignation. More importantly, we emphasize that it doesn’t solve the widespread, systemic problems at the Department of Veterans Affairs. We need both reforms and a reformer, which is why it’s essential for Congress to pass systemic reforms at VA in the coming weeks and months, bringing real accountability, transparency, and choice to the Department of Veterans Affairs.

“The VA is a big organization that has had problems for a very long time with both management and funding,” Obama said. “[Shinseki] was deeply disappointed that the bad news did not get to him and that structures were not in place to get him information. In some cases, we have computer systems for scheduling from the 1990s. These are old systems and broken down systems. It’s fixable but we have to know about these things.”

Shinseki’s interim successor, Gibson, is a career banker. He was previously president and chief executive officer of the USO, the nonprofit organization that provides programs and services to U.S. troops and their families.

While acknowledging a steep learning curve for Gibson, the president Obama said some problems could be fixed quickly. He said:

The issues are part technology and part management. There is a need for a change in culture at the VA. We may need to get more doctors and nurses. Before we spend money, we need to take care of the basic management that I think can be fixed. The problems don’t require rocket science. They require discipline and execution. Those are things Sloan [Gibson] can handle.