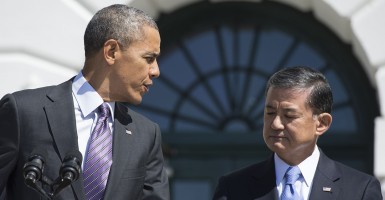 All Washington is speculating on when—not if—U.S. Secretary of Veterans Affairs Eric Shinseki will have to step down. And once that happens, all the chatter will turn immediately to who gets to take the hot seat next. In many ways, that’s the wrong question.

Washington is ever fixated on who’s in and who’s out. But the most important question here is: How can we build a more effective and efficient Department of Veterans Affairs?

That’s a task that requires much more than a new face in President Obama’s cabinet. To fix VA, the next secretary will need an attentive, committed partner in the White House and bipartisan support in the Congress. That’s the only way to establish the administrative and legislative foundation necessary to deliver the world-class service our veterans deserve.

So rather than start with names, let’s start with identifying five fixes all of Washington needs to pursue to get VA right.

1) Create a culture of accountability at the Department of Veterans Affairs. Lack of accountability is not a problem specific to VA headquarters or the Phoenix hospital; it is department-wide. The VA Management Accountability Act can be highly useful in achieving this goal: The secretary needs to be able to fire the leaders who work underneath him. Employees found to be in violation of VA procedures should face real consequences—not just be shuffled over to another slot in the bureaucracy. The same goes for middle management and rank-and-file employees, who right now are largely sheltered from oversight.

2) Empower employees to speak up about wrongdoings. The revelations of falsification of wait lists and bureaucratic corruption have come largely from whistleblowers who were courageous enough to speak truth knowing their truth-telling likely would cost them their job. Many more stories are waiting to be told. The inspector general’s interim report from the Phoenix VA states that investigators received “numerous allegations daily of mismanagement, inappropriate hiring decisions, sexual harassment and bullying behavior by mid- and senior-level managers at this facility.” VA employees should not be afraid to speak out on such matters. Whistleblower protections should be strengthened, the inspector general’s budget increased, and the inspector general should be empowered to pursue these new allegations.

3) The department must be made to answer congressional inquiries in a direct, transparent and timely manner. The House Veterans Affairs Committee documented hundreds of congressional requests for information that have been ignored by department officials. The committee has tried to shame VA into compliance by publicizing the lack of cooperation, but that tactic was met with more inaction and unresponsiveness.

4) Increase the efficiency of service delivery and elevate the quality of care provided by the VA system to that found in the private sector. Recent reports indicate the work schedules of VA doctors are several times lighter than those of their private-sector counterparts. Such inefficiency, driven by excess regulation, red tape and so-called “protections,” necessarily leads to increased wait time. Obama acknowledged the system’s productivity problems when he talked of the need to bring the department into the 21st century. It is not a matter of resources, but rather creating the incentives for those resources to be used efficiently.

5) Increase medical options for our veterans. VA already has a program that allows veterans to go outside the VA health care network on a per-fee basis. Despite the resistance from VA employees, that program needs to be dramatically expanded. Veterans should be given the direct choice to access private care—based on triggers such as geographic hardships, excess wait times or a general lack of quality care. At a House hearing on Tuesday, VA officials admitted they’ve been operating under misguided priorities, and they need to refocus on making outcomes for veterans the primary goal—not the perpetuation of VA’s monopoly. Injecting choice into the VA system also allows free-market incentives to induce VA to improve their service, lest veterans go somewhere else for care.

These priorities are not just for the next secretary. No one man or woman can make it happen. All of Washington—House and Senate, Democrats and Republicans, Veterans Affairs and the White House—needs to roll up their sleeves and get the job done.

VA has a legal obligation to provide services to veterans. But all us have a moral obligation to give back to those who have served us. As advocates, we can fight for a better VA—and we must. And as individuals, we can welcome veterans back into our communities and help them thrive—and in doing so, inject the courage, selflessness and leadership America desperately needs right now.

Pete Hegseth, an Army veteran of Afghanistan, Iraq, and Guantanamo Bay, is the chief executive of Concerned Veterans for America and a Fox News contributor.