The Biden Administration Appeals to the Woke, Shuts Down Garden of American Heroes Project

Report: Veterans Waited An Average of 115 Days for Doctor Appointments in Phoenix 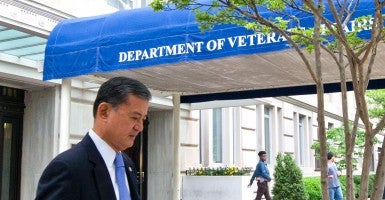 US Veterans Affairs Secretary Eric Shinseki departing the VA on his way to the White House. (Photo: AFP/Getty Images)

In April, Rep. Jeff Miller (R-Fla.), Chairman of the House Committee on Veterans’ Affairs , requested that the VA to look into allegations of delays in VA medical care and preventable veterans’ deaths.  Yesterday, the VA office of Inspector General issued an interim report on the subject, and it is damning.

The report focuses only on Phoenix, Ariz. area VA hospitals, but in Phoenix alone, about 1,700 veterans were waiting for a doctor’s appointment but were not on the electronic wait list for the VA.  Simply put, these vets had gone to the VA and tried to schedule an appointment, but were not put into the scheduling system. The explanation is that some staff at the Phoenix VA would place vets in the system only when they would be placed into an open appointment. Thus, when they were scheduled, the Phoenix VA could claim that each of these vets, many of whom likely waited months, had a wait time of “zero days.”

Other staff would simply delete doctor visits they thought were unnecessary.  Still others would simply change the “requested appointment date” without telling the patient.

All of this sleight-of-hand allowed the Phoenix VA to boast in 2013 that vets waited an average of 24 days for their first appointment, which would look normal.  In reality, yesterday’s IG report shows that these vets waited an average of 115 days for an appointment—almost four months!  Not only do such underhanded tactics hinder efforts to better manage the VA, they also risk veterans falling through the cracks.  Imagine being sick, calling the VA to schedule an appointment and being told “we will call you back when we have an appointment available” – and then they never call back.

This mismanagement has led for many to call for the resignation or firing of VA Secretary Eric Shineski.  The buck stops with Shinseki and President Barack Obama. Let’s see whether, for once, the administration actually holds someone accountable.