Fighting Boko Haram Does Not End With Finding the Girls 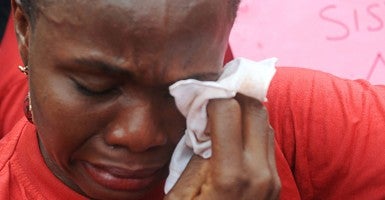 One of the mothers of the missing Chibok school girls wipes her tears as she cries during a rally by civil society groups pressing for the release of the girls. (Photo: PIUS UTOMI EKPEI/AFP/Getty Images/Newscom)

It has been more than six weeks since nearly 300 Nigerian girls were kidnapped by the terrorist group, Boko Haram. Over the weekend, some media reports indicated the Nigerian government had agreed to some sort of prisoner exchange for some of the girls that remain missing, but the deal reportedly was  called off.

Nigeria’s chief of defense staff has said the military knows where the girls are but is unwilling to use force to rescue them because it would be too dangerous. The girls are believed to be held in a remote forest near the Cameroon-Chad border.

Since the girls were kidnapped, Boko Haram has continued to victimize soldiers and civilians alike in northern Nigeria and Cameroon with additional kidnappings, car bombs and indiscriminate shootings. Last week Boko Haram attacked the Christian district in Kano, Nigeria’s second-largest city, and executed a double car-bomb attack in the city of Jos that killed 118.

The immediate task remains to rescue the girls, but leaders ultimately need a long-term strategy to suppress Boko Haram in northern Nigeria and the greater region.

Chad and Cameroon have taken a positive step by sending their own troops to the Nigerian border, where they are coordinating with Nigerian forces to counter Boko Haram. Increased regional coordination not only will help to eliminate the support system that provides Boko Haram with recruits and arms,  it also will help to create a clearer operational picture of Boko Haram’s areas of control.  The Nigerian defense forces have been limited in their ability to patrol areas in the remote border regions of northern Nigeria.

Last week the United Nations Security Council approved sanctions against Boko Haram – adding it to the U.N.’s al-Qaeda Sanctions Committee’s list. Organizations on the list are subject to asset freezes, arms embargos and travel bans, but the sanctions’ enforcement requires states to self-implement and self-report, which few in the region have the capacity to do.

Despite the efforts of the United States and our partners to help find the girls—which now includes the deployment of 80 U.S. troops to Chad to conduct surveillance flights and operate drone aircraft in northern Nigeria and the surrounding area—Rear Adm. John Kirby, the Pentagon press secretary, said the mission to find the girls amounts to searching for “a needle in a jungle.” Yet, because the U.S. still faces certain limitations in working with the Nigerian military because of human rights abuse allegations, there are limits on how and what type of intelligence can be shared with the Nigerians.

Given the complicated nature of effectively countering Boko Haram, a long-term strategy, not a piecemeal one, remains essential to maintaining regional stability and protecting U.S. interests.