Texas Is Booming With New Jobs and ‘Dirt Cheap’ Energy. Why Are Some People Still Naysayers? 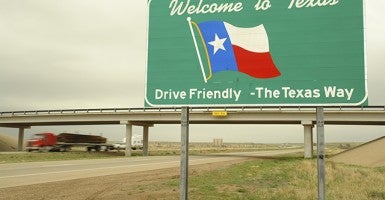 Texas is getting under some people’s skin.

Its population is growing. Its people are becoming more prosperous. It is creating both billionaires and employing more minimum-wage workers than any other state. Its energy sector has thrived—year-over-year drilling has doubled so far in 2014, with 10,000 new wells drilled just since January. Its technology corridor now extends for hundreds of miles along I-35.

Texas is the hottest state economy this side of North Dakota. But some still refuse to acknowledge the Texas Miracle.

The recovery benefits only the rich, they say. Pro-business means pro-big-business. Job growth has merely kept pace with population growth.

But that’s just it. People are moving to Texas, and it certainly is not for the weather. Its population has grown more than 5 percent just since 2010—a rate exceeded only by North Dakota, another oil-boom state, and the rapidly gentrifying District of Columbia. California, by contrast, lost congressional seats for the first time in state history after the 2010 census.

“You kind of look around and see your neighbors are driving a little nicer car or you realize the restaurants are a little bit more crowded than they used to be or there might be a little bit longer line at the ballpark for hot dogs or something like that,” said Patrick Jankowski, a Houston-based economist. “Everyone is benefiting from what’s going on.”

As the steady drumbeat continues, including job growth and improved livelihood in Texas, the naysayers have distilled their argument to two main points—the oil and gas revolution blocks renewable fuels or the Texas Miracle is actually a statistical mirage.

The first of these complaints is dead on.

Cheap and plentiful oil and gas is beating subsidized, expensive and unreliable solar and wind energy hands down. Much to the chagrin of solar industry lobbyists, as National Journal pointed out in a recent story–“Why Is Texas Terrible at Producing Solar Power?” –Texas refuses to subsidize one form of energy when another is so plentiful, so prosperous on its own and so capable of employing thousands of citizens.

[Solar] has also taken a beating from economic forces. Electricity is typically dirt cheap in Texas, making it hard for any power plant to turn a profit, especially one with high up-front costs like a solar farm. And the fracking boom has stiffened competition for solar energy as the supply glut and resulting price dip in fuel prices has made natural-gas power plants a more attractive option.

Exactly. And that’s what makes the facts of Texas’ economic strength difficult for critics to refute.

So it should come as no surprise Texas’ business climate is rated in the top 5; California’s is in the bottom 10. Texas has had four times the job growth of California over the last 20 years. Its unemployment is about 50 percent below California’s and its incomes are growing at a faster pace than California’s.

“For Californians to pretend that they are doing as well as Texas is a great delusion,” said former Reagan economist Arthur Laffer, who himself moved from California to Tennessee.

Nicolas Loris, who studies energy and environment issues as the Herbert and Joyce Morgan Fellow at The Heritage Foundation, says the growth in Texas’ oil and gas sector benefits other Texans and even those beyond its borders.

“Economic opportunity created by the fracking revolution does not stop in oil and gas industries, but ripples throughout the U.S. economy,” Loris said. “The abundance of cheap, fracked natural gas has fueled employment growth in the manufacturing sector by making U.S. companies more competitive. And lower energy costs have given Americans more disposable income, which encourages further growth.”

Heritage Foundation Chief Economist Stephen Moore noted this week that, without the jobs that have been created in the oil and gas industry, the United States would have produced no net jobs over the last five years.

Moore will address energy policy and state wealth-creation in an upcoming Heritage event on Thursday. It is centered on his new book, An Inquiry into the Nature and Causes of the Wealth of States. Moore co-authored the book with Laffer and philanthropist Rex A. Sinquefield, also speaking at the Heritage event.