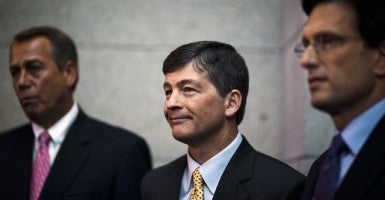 There never has been a shortage of vapid policy analysis in Washington, and the current generation of pundits and reporters is no exception.

The media’s latest political line is that the Republican establishment finally has crushed the Tea Party. The truth, as usual, is more interesting. The Tea Party already has changed the GOP on policy—mostly for the better. But it is suffering this year because some candidates and operatives acting in its name have been motivated more by personal than policy agendas. That’s a shame because the GOP needs the Tea Party to prevent it from lapsing back into the do-little caucus of the George W. Bush-Tom DeLay years. (emphasis added)

The Republican Party is undergoing a serious—and healthy—internal debate about whether it is a pro-business party or a pro-free market party. Reasonable folks can disagree over primary candidates, but conservatives are ill-served when these differences are attributed to personalities because the outcome of the internal debate will have substantial policy implications.

In a speech at The Heritage Foundation on Tuesday, House Financial Services Committee Chairman Jeb Hensarling, R-Texas, sketched out where he stands on that divide when he said, “Let’s tell K Street ‘No’ so we can tell the American people ‘Yes.’”

>>> Related: Hensarling’s ‘Choice’: Success Should Depend on Hard Work, Not Friends in Washington

On a whole host of issues—tax reform, farm subsidies, Export-Import Bank, Fannie and Freddie, and capital markets—there is a fundamental divide within the GOP over how government should interact with business.

Fannie Mae and Freddie Mac are good examples of this. Hensarling has moved to abolish the taxpayer-backed home-mortgage giants. But, as Bloomberg News observed, “His own party’s leaders, backed by industry groups that disagree with Hensarling’s purist free-market philosophy, have stymied his plans to abolish Fannie Mae and limit federal flood insurance.”

>>> Read More: Time to Eliminate Fannie and Freddie, Not Replace Them

There is no doubt the Tea Party and conservative activists have pulled the Republican Party further to the right, and the Wall Street Journal and pundits such as George Will regularly acknowledge this has been good for the party and the country. But as Hensarling inferred, the remaining differences are substantive and, despite what the aforementioned observers may suggest, significant.