Time for Germany to Step Up on the World Stage 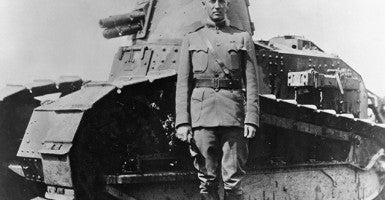 “I’d rather have a German division in front of me than a French division behind me.” So quipped Gen. George “Blood & Guts” Patton.

The German military machine was a fearsome foe in World War II. That was then. Now is now.

Following two incredibly bloody world wars, many worried that a strong Germany would always be a threat to world peace. Indeed, the division of Germany during the Cold War is sometimes spun as a U.S.-inspired tactic to keep Germany and Europe weak. That’s myth, of course, one that should have been dead and buried long ago. A peaceful and prosperous Europe has always been a cornerstone of the American vision for a better world.

Yet today, German defense and political leaders often use the country’s history of military aggression as an excuse for inaction and indifference on the world stage. It’s a poor way to opt out of acting like a responsible nation.

First, no 21st century Western strategist or political leader spends so much as 10 seconds worrying about a united Germany posing a threat to world peace.

Second, Germany’s penchant for standing on the sidelines is far more a danger to the future security of the transatlantic community than a Germany standing tall.

A perfect case in point is the German response to the Ukraine crisis. It has been hugely disappointing. German Chancellor Angela Merkel‘s recent visit to Washington was a display of dismal diplomacy. Rather than show a brave face to Russia‘s monstrous meddling in the Baltic, she joined President Obama at a press conference podium and delivered the diplomatic equivalent of “blah-blah.”

Of course, there are reasons far beyond any “burdens of history” that led Merkel to have little to say. Powerful business interests in Germany are making a lot money doing business with Moscow. An Economist report estimates that German companies have about 20 billion Euros invested in Russia.

Moreover, the average German citizen appears to be largely indifferent to what’s going on along the eastern frontier of the transatlantic community. One poll found 60 percent opposed using the German Air Force to patrol over the NATO nations bordering Russia.

With Berlin acting more like a pocket-lining isolationist than a principled world leader, it was shocking to see the proposed Russian Aggression Prevention Act posit U.S.-German joint action as the centerpiece of its plan to restrain Moscow’s ambitions.

The Senate bill is intended to focus on what the U.S. and NATO can do militarily to deter Russian aggression in Central and Eastern Europe. Yet when it comes to Germany, the bill says little more than “let’s talk” — authorizing $5 million a year to pay for periodic gab-fests for senior U.S. and German foreign affairs officials.

This is weak tea, indeed. Promoting meaningless U.S.-German cooperation in a bill meant to send a strong signal to Moscow is simply soft-headed.

Congress needs to get its head in the game and start cranking out some serious initiatives that will make the Russians take notice. If they want the Russian Aggression Prevention Act to do more than make Vladimir Putin laugh, they should scrap the diplomatic make-believe.

Meanwhile, Germany needs to start acting like the leader NATO needs it to be. There is more to ensuring the future prosperity of Europe than making a buck off of Russian oil and gas.

Germany can do more to battle Moscow’s corrupt business practices, plummeting human rights record, and disinformation and dirty tricks campaign. More importantly, Berlin must resolutely oppose Putin’s willingness to take freedom away at the point of a bayonet.