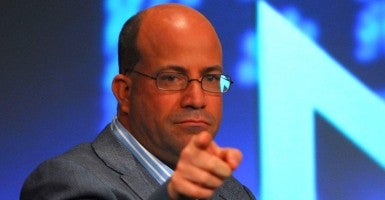 Two weeks after the House voted to establish a select committee to investigate Benghazi, Democrats relented and agreed to name five members to the panel. The story even got coverage on CNN, which is news in and of itself.

At a dinner with journalists in New York earlier this week, CNN’s president indicated the TV network wouldn’t cover the Benghazi committee unless it was “of real news value.”

“We’re not going to be shamed into it by others who have political beliefs that want to try to have temper tantrums to shame other news organizations into covering something,” CNN’s Jeff Zucker said in response to a question about the Benghazi probe. “If it’s of real news value, we’ll cover it.”

At the dinner, Zucker defended CNN’s non-stop coverage of the missing Malaysia Airlines jet. He also suggested climate change was “one of those stories that deserves more attention.”

>>> Related: Why Is CBS News So Quiet on Benghazi?

One of the newly appointed Democrats, Rep. Elijah Cummings of Maryland, called on the committee to “be finders of the facts. I think we have to go in neutral. I don’t think we need be making accusations before we get in the room to get the facts.”

Yet, Cummings—ranking member of the House Committee on Oversight and Government Reform, which has investigated Benghazi—has been an outspoken defender of the Obama administration’s handling of Benghazi. The Daily Caller’s Alex Pappas documented five examples, including Cummings’ comment on May 2 when Republicans announced the committee:

These actions are not a responsible approach to congressional oversight, they continue a trend of generating unnecessary conflict for the sake of publicity, and they are shockingly disrespectful to the secretary of state.

In addition to Cummings, Pelosi tapped Reps. Adam Smith of Washington, Adam Schiff and Linda Sánchez of California, and Tammy Duckworth of Illinois.