George Will to Tea Party: ‘Nancy Pelosi and Harry Reid Are the Problems’ 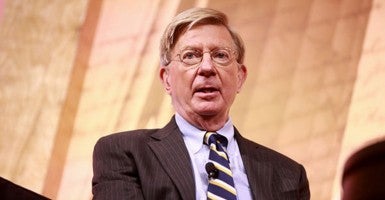 Tea party conservatives need to understand something, says columnist and author George Will: “Nancy Pelosi and Harry Reid are the problems – it’s not that complicated.”

In a sometimes testy primary season, Will disputed that the tea party and a “Republican establishment” needed to be at odds. “The tea party IS the Republican Party today,” he said at The Heritage Foundation Wednesday, adding that “politics is a team sport.”

He referred to an old saying – “You can’t split rotten wood” – to convey that robust debate on the right is a sign that people, and ideas, are strong.

“Nothing is more traditional than Republicans fighting with one another,” he said.

Will took the audience through a brief history of Barry Goldwater’s career and its role in the rise of conservatism. He noted that when Goldwater lost the presidency in 1964, Will heard a journalist say, “Well, that is the last we’ll hear from conservatism.”

Will – whose cellphone case today is a replica of a Goldwater campaign button – said he thought at the time, “We’ll see about that.”

As tea partiers try to keep Republicans connected to the principles of limited government – and persuade Americans to join them – Will said there’s a big problem standing in the way.

The problem in American thought today, he said, is the idea that there should be a huge welfare state, but nobody should pay for it.

Still, tea partiers have the nation’s founding documents on their side, which Will said contain “the language of conservatism.”