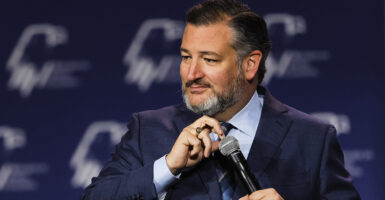 FIRST ON DAILY SIGNAL: Sen. Ted Cruz, R-Texas, commemorated National School Choice Week by filing two bills to advance school choice, one of which his staff said would be the most significant educational reform since the GI bill.

“We need to provide students with a variety of educational options to fit their needs,” Cruz told The Daily Signal in an email statement Tuesday. “I have often said that school choice is the civil rights issue of the 21st century, and I believe no differently today than I did when I began serving in the Senate a decade ago.

“Each student learns differently and ought to be afforded the opportunity regardless of where they come from, how they learn, or what they plan to do, from pursuing a college degree to attending vocational school,” he added.

The Student Empowerment Act builds on Cruz’s Student Opportunity Amendment, an edited version of which passed as part of the Tax Cuts and Jobs Act of 2017. That amendment enabled families to spend up to $10,000 from 529 tax-advantaged savings plans for various non-public K-12 education expenses. Since 2017, 529 plans have grown from 13.3 million to more than 15.9 million in 2022, according to the National Association of State Treasurers.

“The Student Empowerment Act restores the original intent of Sen. Cruz’s Student Opportunity Amendment,” a Cruz spokesperson told The Daily Signal. The original amendment “allowed parents and guardians to use 529 accounts for almost all K-12 expenses—most notably homeschooling expenses and various types of special needs therapies. In an effort to strip the entire amendment from the Tax Cuts and Jobs Act, the Democrats challenged the amendment’s germaneness, and were able to get the Senate Parliamentarian to strip out homeschooling and special therapies from the amendment.”

“Now more than ever, it is important to give children and their families the freedom to choose alternative educational options,” the Cruz spokesperson said. The pandemic showed parents what their children are, and are not, being taught in schools—parents didn’t like what they saw.”

Cruz has spoken out against critical race theory, the politicization of classrooms, and the stranglehold teachers unions have over education.

“The Education Freedom Scholarships and Opportunity Act expands the elementary, secondary, and vocational education options for all children, and allows parents to direct the education of their own children,” the spokesperson added. “The importance of this bill cannot be overstated—if this bill became law, it would be the most significant educational reform since the passage of the GI bill.”

The bills have little hope of passing in the Democratic-majority Senate, but Cruz’s move sets an important agenda for school choice legislation going forward.