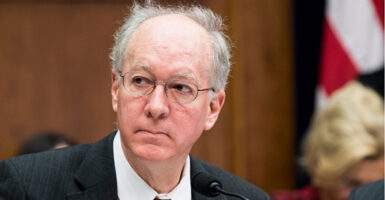 Rep. Bill Foster, D-Ill., on Friday introduced the End the Threat of Default Act, which would eliminate the only constraint on federal debt. (Photo: Bill Clark/ CQ Roll Call/Getty Images)

Legislation sponsored by House Democrats would eliminate limits on government spending not by raising the debt ceiling, but by repealing it.

Introduced by Rep. Bill Foster, D-Ill., and co-sponsored by 42 other Democrats, the End the Threat of Default Act removes the $31.381 trillion limit set by Congress on how much the U.S. Treasury can borrow. The federal government hit that limit last week, causing Democrats to request more money to fund current government spending obligations.

“The government has an obligation to pay its bills,” Foster said in a statement. “We can and should have a real conversation about overall spending, but the full faith and credit of the United States must never be compromised.”

“The debt limit is an indispensable tool to safeguard the American people from reckless expansions of the size and scope of the federal government,” said Richard Stern, director of the Grover M. Hermann Center for the Federal Budget at The Heritage Foundation. “Repealing the debt limit would simply give a blank check, with your name at the bottom, to the woke left-wing establishment that is trying to dismantle our nation.” (The Daily Signal is the news outlet of The Heritage Foundation.)

Most Americans oppose raising the federal debt ceiling without accompanying cuts to federal spending, according to a new RMG Research poll. More than 60% of registered voters surveyed said Congress should either raise the debt ceiling with spending cuts or refuse to raise the ceiling at all.

The Biden administration won’t negotiate with Republicans on the matter, according to White House press secretary Karine Jean-Pierre, prompting Speaker of the House Kevin McCarthy, R-Calif., to call President Joe Biden’s stance “a sign of arrogance.”

Biden said Friday that if Congress does not raise the debt ceiling, “we have a calamity that exceeds anything that’s ever happened financially in the United States.”

But Stern said the “clean” unconditional debt limit increase suggested by Biden would convey that America is fiscally irresponsible.

Treasury Secretary Janet Yellen said she projects Congress has until at least June to pass a debt-ceiling increase. In the meantime, the Treasury will take “extraordinary measures” such as “suspend[ing] new investments” in the Civil Service Retirement and Disability Fund and the Postal Service Retiree Health Benefits Fund to free up money for payments deemed essential, she told McCarthy in a Jan. 19 letter.