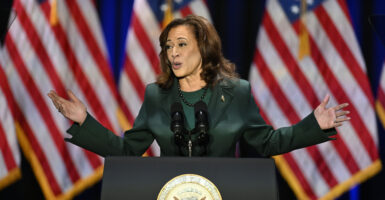 Vice President Kamala Harris appears to have purposefully avoided mentioning the right to life Sunday in an abortion speech as she referenced the Declaration of Independence.

“America is a promise,” Harris said. “It is a promise of freedom and liberty—not for some, but for all.”

“A promise,” she continued, “we made in the Declaration of Independence that we are each endowed with the right to liberty and the pursuit of happiness.”

“Be clear,” Harris added. “These rights were not bestowed upon us.  They belong to us as Americans.”

“Convenient that she left the ‘right to Life’ part out of ‘endowed by their Creator with certain unalienable rights, that among these are Life, Liberty and the Pursuit of Happiness,’” tweeted The Conservateur founder Jayme Chandler Franklin. “But I guess you have to gloss over the Declaration of Independence’s explicit call for the ‘right to Life’ while campaigning for abortion.”

Harris also took a clear shot at Florida Gov. Ron DeSantis, a Republican, when she asked, “Can we truly be free if so-called leaders claim to be, I quote, ‘on the vanguard of freedom’ while they dare to restrict the rights of the American people and attack the very foundations of freedom?”

The vice president was referencing DeSantis’ 2022 State of the State address in which the governor reminded Floridians of his efforts to keep the state open and prospering: “While so many around the country have consigned the people’s rights to the graveyard, Florida has stood as freedom’s vanguard,” DeSantis said.

Team DeSantis was quick to respond to the vice president’s remarks, tweeting out a photograph of the “Attestation of Vaccination” documentation required for the Harris event. Since it is illegal to require vaccination status in Florida, the paperwork has an option for attendees to say “I decline to answer whether I have been vaccinated.”

Florida Family Action President John Stemberger said in a statement that Harris’ visit “has much more to do with politics than it has to do with abortion.”

“Out of over 19,000 cities in America, she is coming to the one city where America’s most popular governor lives to basically stage an in-your-face political statement,” he told the Tampa Bay Times. “The governor is not merely a state leader. He is also a national leader who is a present and future threat to the Biden-Harris administration and their radical agenda.”