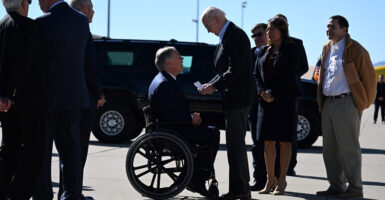 For a few days last week, President Joe Biden belatedly and halfheartedly turned his attention to the southern border.

He announced a magical new “legal pathway” to enter the country without a visa, visited an eerily empty El Paso, Texas, and attended a summit in Mexico City with his Canadian and Mexican counterparts.

All America got from these three events was wider abuse of immigration parole and a “Declaration of North America” full of woke buzzwords that barely touched on border security.

As the classic tourist souvenir T-shirt might say: “My president went to Mexico, and all I got was this lousy Declaration.”

On Jan. 5, Biden spoke to the nation about “how my administration is dealing with our situation in the southwest border.” He blamed Republicans for not passing his pet immigration bill and for not giving him all the money he requested.

Maybe that’s because his bill proposed amnesty for millions of people living here illegally, while doing almost nothing to impede new ones from joining them.

Or maybe it’s because Congress knows the $3.5 billion in extra Department of Homeland Security funding Biden wants will go to the Mayorkas Migration Machine and not to deterring, detaining, or deporting foreigners who are here illegally or who fail to get asylum.

Biden helpfully pointed out that “there are laws to get here legally.” He tried to blame the current chaos at the border on unusual world events, noting that “over the past several years, thousands of people have been fleeing … countries ruled by oppressive dictators.”

He may be unaware that much of Latin America, if not the world, has been ruled by oppressive regimes a lot longer than that. It’s Biden’s facilitation of illegal entry, not a sudden change in hemispheric politics, that is driving thousands to the border every day.

Biden also announced that he was expanding his egregious misuse of parole by adding Cuba, Haiti, and Nicaragua to an existing program for Venezuelans. Up to 30,000 people per month from the three additional countries will be able to apply through the “CPB One” application to enter the U.S. by air, where they will be paroled in for two years and allowed to work.

On Jan. 8, Biden visited the U.S.-Mexico border for the first time in his presidency—and apparently, for the first time in his 50-year political career. Texas Gov. Greg Abbott met Biden as he left the plane and handed him a one-page letter saying that the border “chaos is the direct result of your failure to enforce immigration laws” and suggesting five immediate actions the president could take to secure the border, none of which required new legislation or funding.

Biden was in El Paso all of three hours. He saw streets emptied of the illegal aliens who had been sleeping on them only days before, as well as the trash they left behind. Accompanied by friendly politicians and government officials, Biden visited a Customs and Border Protection “migrant processing center” that was also curiously empty, and then watched a sniffer dog look for drugs.

He didn’t meet with illegal immigrants, talk to El Paso locals, or take questions from the press. The entirety of his “remarks” on the day were that (a) “They’ll need a lot of resources, and we’re going to get it for them,” and (b) he hadn’t read Abbott’s letter yet.

Had Biden met some actual illegal immigrants, he might have learned that they “sold everything to come here because President Biden told us to come.”

Had he spoken to El Paso residents, he might have learned that he saw a sanitized city and not the reality of “a sudden influx of migrants that has overwhelmed local resources.”

Had he spoken to the press, he might have been asked questions, such as whether he is fulfilling his constitutional duty to “take care that the laws be faithfully executed” in releasing more than 1 million illegal entrants into the country, or what he intends to do to secure the country now.

The Washington Post claims that the “action on fentanyl” will be “a fair benchmark for gauging how successful Biden’s first trip to Mexico will have been.” The Post seems to have little interest in that other problem coming from Mexico, the 200,000-plus illegal immigrants every month.

Neither did Lopez Obrador, who thanked Biden for not building “even one meter of wall.” Incredibly, “U.S. and Mexican officials ran out of time before discussing immigration” during their formal meetings.

The fact sheet for the North American Leaders’ Summit listed immigration as the third of five “key deliverables.” The action proposed boils down to “expanding legal pathways” (i.e., making it easier for millions more aliens with weak asylum claims to enter the U.S.).

The White House announced a new “virtual platform” to tell future illegal immigrants how to take advantage of the parole loopholes Biden has created, and a “new center in southern Mexico” to help them do it.

It ends with this administration repeating its laughable assertion that it will ensure that “migrants with unmeritorious protection claims are quickly removed.”

Shortly after this, the White House released a portentous “Declaration of North America.” It covers six general areas, of which the first is—of course—Diversity, Equity, and Inclusion.

Much further down, you find Migration and Development, in which the Biden administration congratulates itself on “having collectively welcomed record numbers of migrants and refugees … under new and expanded labor and humanitarian programs.”

The declaration does nothing for border security except triple down on the Biden strategy of allowing unfettered illegal immigration by making a mockery of the asylum process.

All in all, Biden’s busy week brought home bupkis for the border.

Meanwhile, some concerned House Republicans reportedly made efforts at border security a condition of their support for Rep. Kevin McCarthy, R-Calif., to become speaker. The Texas delegation has a border plan to propose, and other individual bills dealing with aspects of immigration and border control can be expected to be introduced by the new 118th Congress.

With the current political balance, hopes for anything to pass in the next two years must be kept realistic. That said, if you believe in our nation as a sovereign state and not as an experiment in globalist, borderless new order, you have to hope that a combination of fiscal, oversight, and legislative action will begin to stem the tide of lawless and feckless leadership with regard to parole, asylum, and illegal entry over our southern border.