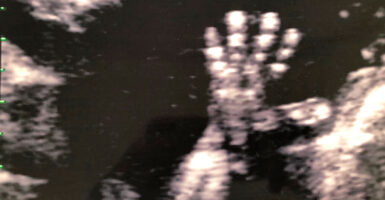 A fetal ultrasound makes clear the unborn are more than just a clump of cells as pro-abortion activists insist. Yet, in all too many states, they have no constitutional rights or protections. (Photo: BSIP/ Education Images/Universal Images Group/Getty Images)

Morse Tan is the dean of the Liberty University School of Law. He previously served as U.S. ambassador-at-large for Global Criminal Justice, where he oversaw the indictment, sanctioning, capture, and/or conviction of war criminals. Tan has also served as a law professor and visiting scholar for a number of law schools, including at the University of Texas at Austin.

The sanctity of life for every human being remains the No. 1 justice issue in America, and it’s the leading global human rights issue of the 21st century.

As Americans, we have learned much about abortion over the past five decades. We are grateful that Roe v. Wade and Casey v. Planned Parenthood were soundly overturned at the Supreme Court, but one thing is certain: The pro-life movement is by no means over. The just struggle has moved to each state.

I had the privilege and opportunity to serve as the U.S. ambassador-at-large for global criminal justice. In that capacity, I led the U.S. effort to bring justice around the world to mass atrocities and crimes—genocide, war crimes, and crimes against humanity.

Whether it was monitoring the wrapping up of the Extraordinary Chambers in the Courts of Cambodia (aka the Khmer Rouge Tribunal), which addressed some 1.6 million killings, or employing the War Crimes Reward Program to seek the capture of Felicien Kabuga, the chief financier and primary instigator of the Rwandan genocide, which destroyed somewhere between 800,000 to 1.2 million lives, or the 15 million exterminated by the North Korean government, I have fought for justice.

Here in the United States, it may be difficult to stomach, but we have destroyed the lives of some 63 million (a low estimate) of our children through legalized abortion.

Sadly, these deaths in the United States have been lost behind a clinical curtain, out of the public eye and under the false pretense of constitutional rights.  Shockingly, we had one of the most permissive legal frameworks for slaughtering unborn babies in the world, alongside those of countries such as North Korea, Vietnam, Canada, and China.

Professor Jeff Tuomala of Liberty University’s School of Law has carefully researched the historic Nuremberg Trials in the aftermath of World War II, which counted abortion among the mass atrocities committed by Nazi war criminals.

Along those lines, Arkansas passed legislation recognizing abortion as a crime against humanity, the challenge to which was withdrawn in the 8th U.S. Circuit Court of Appeals after the decision in Dobbs v. Jackson Women’s Health Organization.

In the Dobbs decision last June, the majority opinion pointed to “Baby Moses laws” in all 50 states that enable women to leave their babies at public places, such as fire stations, so that they will be taken care of by the state. In addition, there are extensive lists of parents nationwide who want to adopt, but are not given the opportunity.

Instead, the dismal adoption rates are cited as a reason abortion is necessary in the Dobbs dissent.

The dissenting opinion in Dobbs also asserted that abortion “rights” were necessary for the full citizenship of women. Susan B. Anthony or Elizabeth Cady Stanton, who advocated for women and their children, would be shocked to hear the dissent’s view that destroying one’s offspring is necessary for full citizenship.

Just as we recognized this week the courage of Martin Luther King Jr. in championing civil rights and promoting legislation that overturned Jim Crow laws in America, we should not ignore the legacy of abortion in minority communities.

Alveda King, the niece of Martin Luther King Jr., poignantly asks how we can live the dream if we are killing our children.

Abortion is the leading cause of death for African Americans, and most Planned Parenthood abortion clinics are in neighborhoods with large minority populations. In New York City, more African Americans are aborted than are born.

Even a cursory look at the life and writings of Margaret Sanger, who advocated for racist eugenics as the founder of Planned Parenthood, demonstrates that this was also by design—the stunning “Final Solution” against racial minorities.

In terms of federally protected and endangered species, the embryo of a sea turtle or the egg of a migratory bird currently has more protection from certain state governments than a human baby in the mother’s womb.

If we are to be pro-science, it is worthwhile to note that every major medical textbook on this subject makes clear that the young one developing in the womb is a living being of the species homo sapiens.

The Scriptures teach in Psalms 139:13-14: “For you created my inmost being; you knit me together in my mother’s womb. I praise you because I am fearfully and wonderfully made. Your works are wonderful. I know that full well.” Likewise, it also makes plain from Hebrew law that an unborn child should be treated as a human being (Exodus 21:22-25).

One of the most foundational ethical axioms is that innocent human life should not be killed. Babies gestating in their mothers’ wombs are innocent and have committed no crimes. They are voiceless, defenseless, and our most vulnerable. Unlike adults in our society, they have no vote, cannot form a lobbying group, or file a lawsuit.

The youngest members of our society deserve to live, the predicate for all other human rights.

So, while Dobbs has finally overturned Roe and Casey, our work to promote and protect the lives of the unborn and extend constitutional rights and protections to the most vulnerable is by no means finished.

Contrary to the current positive law in certain states, every child in America deserves the rights to life, liberty, and the pursuit of happiness proclaimed in our founding document, the Declaration of Independence.