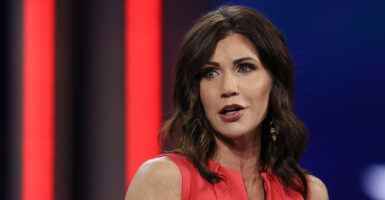 South Dakota Gov. Kristi Noem announced her support for a bill to protect minors from controversial transgender medical interventions in a statement to The Daily Signal on Wednesday. Pictured: Noem at the Conservative Political Action Conference held in the Hyatt Regency on Feb. 27, 2021, in Orlando, Florida. (Photo: Joe Raedle/Getty Images)

FIRST ON THE DAILY SIGNAL: South Dakota Republican Gov. Kristi Noem has announced her support for House Bill 1080, a measure which would prohibit controversial transgender medical interventions such as hormones and surgery for minors.

“Governor Noem supports this legislation and will be watching as the legislature works through the process,” Ian Fury, Noem’s chief of communications, told The Daily Signal in a statement Wednesday.

H.B. 1080 bars health professionals from prescribing or administering to minors any drug to delay or stop normal puberty or any cross-sex hormones such as testosterone to females and estrogen to males. It also bars them from performing “any sterilizing surgery, including castration, hysterectomy,” and other surgeries to remove sex organs, or any surgery “that artificially constructs tissue having the appearance of genitalia differing from the minor’s sex.” Finally, the bill prohibits the removal of “any healthy or non-diseased body part or tissue.”

Many prominent American health institutions push hormones for children, based on the theory that kids who persistently and consistently claim to identify with the gender opposite their biological sex will commit suicide if doctors do not help them force their bodies to conform to their self-image. They do so despite the weak evidence on the subject.

H.B. 1080 allows health professionals to perform the controversial interventions for minors “born with a medically verifiable disorder of sex development, including external biological sex characteristics that are irresolvably ambiguous,” and minors who do not have a sex chromosome structure that is normal for a biological male or female. The bill also includes a “grandfather clause,” exempting any health care professional who began “a course of treatment for a minor” that would otherwise violate the bill before July 1, 2023.

South Dakota Republicans previously filed a similar bill in the 2020 legislative session, House Bill 1057. That bill failed, in part because Sanford Health, a hospital network that is the state’s largest employer, lobbied against it. Sanford also opposed a bill to prohibit males who claim to identify as female from competing in women’s sports. Noem issued a partial veto against the first version of the bill, claiming that it opened up thorny legal issues, only to sign a similar version later.

“You want to believe it’s not about the profit, but you also witness the reality of what’s happening on the ground and can’t help but wonder,” Mills added.

State Rep. Bethany Soye, a Souix Falls Republican in the ninth house district, told The Daily Signal that she thinks the bill is more likely to succeed this year.

“Today there is much more public awareness of what is going on in our state than there was three years ago,” she said. “Sanford Health has been very bold in promoting chemicals and procedures that cause permanent damage to children.”

“There has also been a lot of national media attention pointing out the disconnect between South Dakota’s claimed conservative values and the practices that we are allowing to occur in our state,” Soye added.

The Republican also argued that minors cannot consent to transgender medical interventions that may have lifelong effects such as sterilization and weakening bone density.

“The list of things that a child under 18 cannot consent to is vast: drinking alcohol, buying cigarettes, getting a tattoo, buying cough syrup, etc. Yet all of these activities cause less permanent damage than chemicals that permanently stop their natural development and turn them into lifelong medical patients,” Soye said. “Studies show that when allowed to experience natural puberty, 80-90% of children struggling with their identities will accept and thrive as their biological sex.”

“It’s time for us to stop experimenting on kid’s bodies,” Family Heritage Alliance Action Executive Director Norman Woods said in a statement Tuesday. “We have been perpetuating the dangerous lie that through medical intervention, we can change a person’s sex. This harmful idea, and the industry profiting from it, are leaving a trail of broken bodies in their wake.”

The American Civil Liberties Union of South Dakota opposed the bill, claiming in a statement that it would “prohibit doctors from providing live-saving gender-affirming care to transgender South Dakotans.”

Sanford Health did not respond to The Daily Signal’s request for comment on the bill.