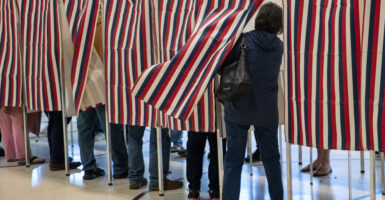 A voter enters a booth to fill out a ballot at an elementary school on Nov. 8 in Manchester, New Hampshire. (Photo: Scott Eisen/Getty Images)

A federal court in Florida is considering compelling the Justice Department to reveal more about President Joe Biden’s executive order on promoting voter registration after a mediation hearing this past Thursday.

Agencies in the Biden administration have mostly ignored information requests from members of Congress, the media, and watchdog groups about a March 2021 Biden executive order that directed federal agencies to promote get-out-the-vote efforts and to work with private organizations to do so.

In October, the Justice Department invoked “presidential privilege” to shield related documents and asserted release of those documents would create “public confusion.”

On Thursday, the U.S. District Court for the Middle District of Florida held a mediation hearing with the Foundation for Government Accountability, a watchdog group, and the Justice Department. The case began last April.

“We would like to arm Congress with the information we obtain as well as state attorneys general,” Stewart Whitson, legal director for the Foundation for Government Accountability, told The Daily Signal in a phone interview.

The House Committee on House Administration, which has a subcommittee on elections, will investigate the implementation of the executive order.

But more than 50 Republican House members have inquired about the order in letters to administration officials.

Rep. Claudia Tenney, R-N.Y., is the co-chair of the House Election Integrity Caucus, and noted the executive order is a pared-down version of what Democrats failed to pass in the so-called For the People Act, which, among other things, would have engaged federal money behind voter-registration efforts.

“The Biden administration has actually given power to federal agencies beyond departments of election boards in states to actually engage in voter registration,” Tenney told The Daily Signal on Friday during a Zoom press conference.

The Education Department announced in April that the Federal Work-Study Program at colleges and universities can be used to pay for students to register voters. The Justice Department previously announced it would boost awareness of voting rights for convicted criminals after release in compliance with Biden’s order, while the Department of Homeland Security plans to focus on voter registration at naturalization ceremonies.

“These are things I think should be the focus of an expert agency, that would be the board of elections in each state has to handle the issues regarding vote-harvesting, the verification of voters, maintaining proper lists, making sure those lists are updated in terms of people who are no longer residents, people who aren’t citizens, and people who are not eligible to vote,” Tenney said. “So, I would rather keep that in the hands of one agency. Once you spread it across all these agencies, including [the Department of Housing and Urban Development], and virtually every federal agency has been incentivized to get involved in this practice, I think that’s a mistake.”

The Justice Department did not respond to an inquiry from The Daily Signal for this report.

Although the foundation anticipated more than 5,000 pages, in September the Justice Department provided just 135 pages of documents, which excluded the department’s “strategic plan” for implementing the order.

The documents that have been released also revealed the existence of a “Voting [Executive Order] Interim Strategic Plan Template” the White House shared with federal agencies to guide them as they crafted their strategic plans to carry out the executive order. The template instructs agencies to develop “ambitious potential actions” that “affirmatively advance equity of underserved or disadvantaged communities in the voting process.”

“Obviously, there is concern that this directive will lead to efforts that target only those voters that tend to vote Democrat—an illegal, unethical, and unconstitutional use of federal executive power and taxpayer-funded resources,” Whitson said.

The Florida-based Foundation for Government Accountability filed its first Freedom of Information Act request with the Justice Department in July 2021, four months after Biden signed the executive order.  In April 2022, the foundation sued to get the documents in the U.S. District Court for the Middle District of Florida.

In July, the court ordered the Justice Department to turn over the documents pertaining to the executive order.

The department filed a court motion in October for summary judgment asserting the “strategic plan” and other documents were protected under presidential communication privilege and that the release would cause “public confusion.”

“And such public confusion would result from disclosure of the strategic plan because it contains many proposed actions that the public might construe as future commitments, past actions, or provisions already in place. DOJ therefore properly withheld the Strategic Plan in its entirety,” the department’s October motion says.

Both parties filed subsequent motions in November and December. On Thursday, both argued their respective cases during the mediation hearing.

The 135 pages did contain some relevant information, said Whitson, legal director for the foundation. That included a “listening session” the White House convened between federal agencies and a select group of voter organizations to “provide their recommendations and thoughts” on how federal agencies should carry out the executive order.

“While the documents we obtained did include a couple of important revelations, unfortunately, it’s clear that the DOJ is still bending over backward to avoid transparency. Why?” Whitson said. “If the president’s executive order is truly about promoting access to voting as the White House claims, why keep the plans secret?”